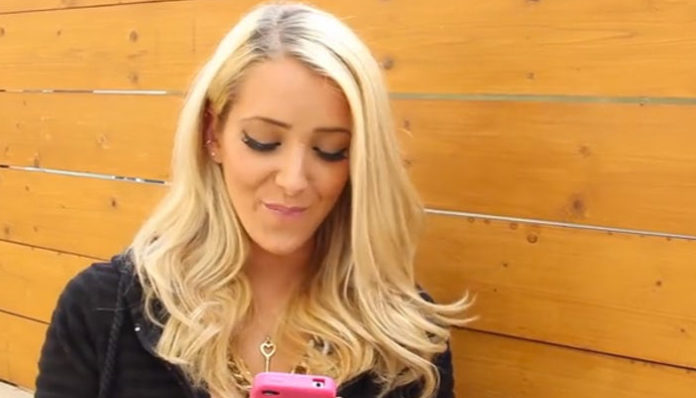 The most popular female personality on Youtube, Jenna Marbles has been posting videos as early as 2009. Born and raised in Rochester, New York, she launched her channel in 2010, shortly after obtaining her Master’s degree. Putting herself out there, the blonde began updating her account with new content, from random vlogs to challenge videos. After a while, one of her videos- How to Trick People Into Think You’re Good Looking went viral, with millions of views in just a few days. Her initial breakthrough, it has since been viewed over 66 million times on the site- making it her most popular upload to date.

Since then, she has continued to update her channel with new videos- from makeup tutorials to clips of her gaming. As of October 2017, Jenna has amassed over 17.6 million subscribers- and counting! In addition to her primary channel, she also has a secondary account under the name, “JennaMarblesVlog” that is primarily for vlogs. Though not as active (it hasn’t been updated since last winter), it has also gained over 1.7 million subscribers in the past few years. For her work on Youtube, she received a Shorty Award for the category of Best Youtube Comedian in 2015.

In addition to her online career, Jenna has also appeared on television multiple times. For instance, she has been featured on the talk shows, Larry King Now, The Late Late Show with James Corden, Cocktails with Khloe, and The Show with Vinny. More recently this year, she was also a guest on Goin’ Raw with Timothy Delaghetto. In terms of acting, the Youtube star appeared in the 2015 film, Road Hard which starred Adam Carolla, Jay Mohr, and David Alan Grier. That same year, she also made a cameo in the comedy, Natural Born Prankers (2015). According to IMDb, she will be co-starring in an upcoming action movie titled, Coleman which is currently in the pre-production stages.

What else has Jenna been up to? On the web, she currently hosts a weekly podcast called “The Jenna and Julien Podcast” with her boyfriend, Julien Solamita. Popular among fans, they discuss a variety of topics from life stories to conspiracy theories; of course, guest stars such as Shane Dawson, are frequently invited onto the show. Aside from that, she has also released her own brand of dog toys called “Kermie Worm and Mr. Marbles”, which are based upon her own pups- an Italian Greyhound named Kermit and a chihuahua named Marbles.

One of the most subscribed to users on Youtube, Jenna Marbles first rose to fame on the site in 2010, with the release of her video, How to Trick People Into Thinking You’re Good Looking

Jenna Marbles was born in Rochester, New York, where she was raised and went to school. It wasn’t until after her high school graduation that she moved to Boston for college.

She is of French, Italian, German, and Irish descent

Is Jenna Marbles’ in a Relationship?

Jenna Marbles has been dating fellow Youtuber, Julien Solomita since 2013. Since then, they’ve starred in multiple Youtube videos together.

In the past, she had dated fellow Youtuber, Max Weisz for four years. Allegedly, they had met something after graduate school, though they later broke up in December 2012.

The youngest out of two children, she has an older brother named Devon Mourey.

As a student, she went to Brighton High School in Rochester, New York.

Did Casey Neistat Go to College

Following her high school graduation, she relocated to Boston to attend Suffolk University. After obtaining her Bachelor’s degree in Psychology, she continued her studies at Boston University where she eventually received a Master’s in Sports Psychology and Counselling.

According to sources, Jenna Marbles easily makes six figures from her Youtube channel.

As of 2017, Casey Neistat has an estimated net worth of $4 million.

In an interview, she stated that she likes looking at her phone and “doing nothing as possible” in her free time

As a kid, she liked steamed artichokes

Her favorite films include Airplane, The Jerk and “anything Will Ferrell”

Prelude to a Super Airplane by Brian Spaeth

Born on September 15, she is a Virgo