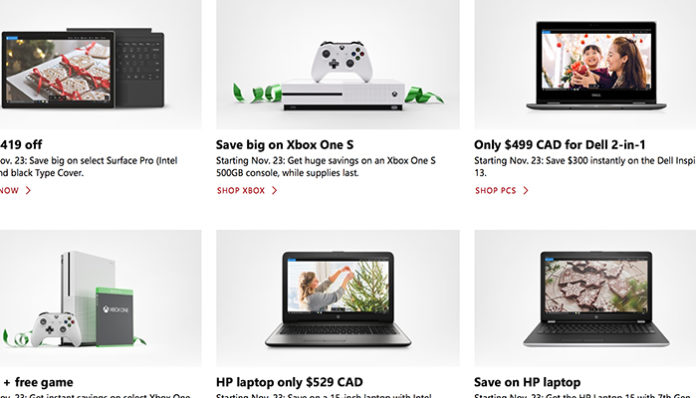 One of the biggest companies in the tech world, Microsoft is a major player when it comes to computers. Founded by Bill Gates in 1975, the brand has grown exponentially over the past four decades. Looking back, they’ve come a long way since the development of their first operating system in the early 80’s. Today, Microsoft not only produces computer products, but tablets, video games, and more. In fact, many have hailed it to be one of the most valuable companies in the world. So far in 2017 alone, they have pulled in more than $21 billion from sales.

Despite being such a large business, Microsoft regularly takes part in the Black Friday weekend every year. One of their greatest sales events of the year, they drop the prices of countless items from laptops, to gaming consoles. Why purchase for retail, when you can snatch the same thing up for a fraction of the original price? For those who would rather avoid the long line ups that are typical with brick and mortar stores, you can easily shop online in the comfort of your home via their official Microsoft website. To sweeten the deal, they even offer free shipping to your front step! It really doesn’t get any more convenient than this.


With that said, what products are being offered this Thanksgiving weekend? From the Black Friday previews that have been released, it would appear that Microsoft will be lowering the prices for a variety of laptops including the Surface Pro, as well as a number of HP, and Dell models. Some will even come with free goodies- for instance, you can get a Surface Laptop with a new Harman Speaker for cheap! Not only that, but they will also be discounting video games, gaming controllers, speakers, and even smart phones. Don’t want to miss out on their once-in-a-year discounts? Be sure to take a look at their Black Friday flyer at the bottom of this page!

Now you can get the Surface Pro, complete with a Type Cover for only $899.99! Featuring one of the fastest startups yet, it comes with a quitter finless cooling system and front-facing speakers. Free 3 month trial of Adobe Creative Cloud included.


Aside from what we’ve listed above, Microsoft has tons more deals to be had this Black Friday! For instance, they will also be discounting, Malibu earbuds, Office 365, Harman Kardon Invoke Speakers, and more. Be sure to take a look at their ad scans if you don’t want to miss out on any items!

When does Microsoft open for Black Friday?

The Black Friday deals will begin at 12:00AM ET sharp on Thursday, November 23rd, 2017. Some items may only be available while supplies last, so remember to try to get online nice and early that day!

Like we’ve mentioned above, the Black Friday sales will be commencing at 12:00AM ET sharp on Thursday. Seeing as how the deals seem to be online only, you can do your shopping whenever you’d like, after the discounts have gone active. Just remember not to wait until the last minute if you’re hoping to score some goods!

As far as we can tell, Microsoft’s Black Friday deals appear to be online only.

Many products purchased from the Microsoft Store can be returned for a refund. To do so, simply click on “Request a Return” on your Order history, after you’ve logged into their website. The customer is not responsible for the shipping charges as they will offer a prepaid shipping label for the return. 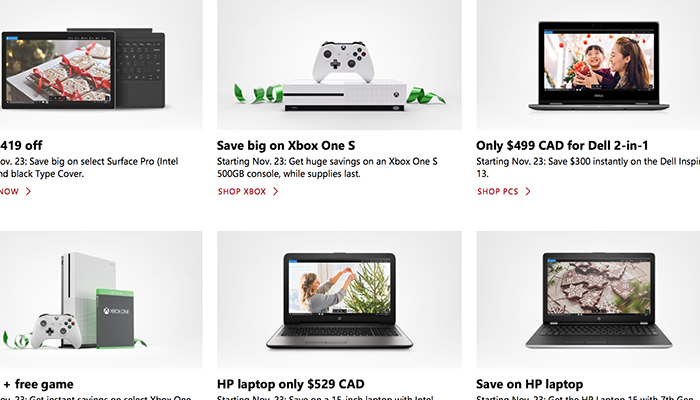