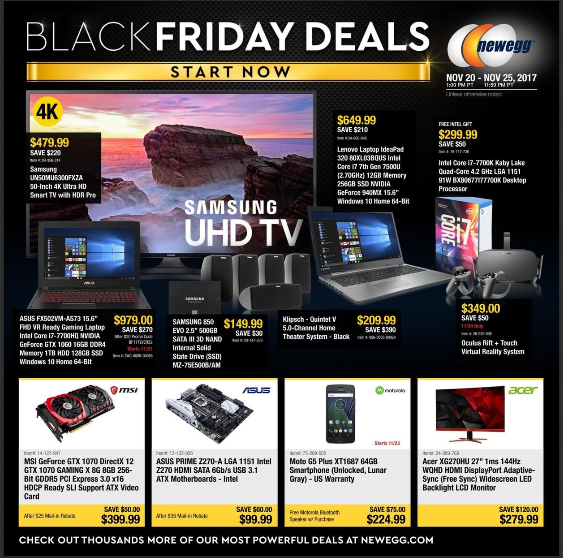 The popularity of desktop PC gaming has exponentially increased in the last decade, booming in popularity in rates comparable to those of the technological advancement of the hardware that it is played on. Custom built computers have become a staple of the gaming world as a result. Building a gaming PC is often more cost effective than buying a pre-built computer. Buying computer parts and assembling them is not only fun, it’s a great learning experience.

Newegg was found in 2000 by Taiwanese immigrant Fred Chang. The company gradually expanded over the next several years. Newegg was named as one of the internet’s top 10 computer retailers in 2005, just 5 years after its inception. Now in 2018, Newegg Black Friday Deals are some of the best available online and in-store!

Newegg is undoubtedly one of the most popular computer hardware sites in North America. Their wide assortment of products, great prices, and customer service have consistently landed them among the highest ranked computer hardware retailers. With Black Friday 2017 just around the corner, gamers are flocking to sites like Newegg for the best deals on computer parts for the year. Newegg Black Friday deals often outperform most other companies.

When does Newegg open for Black Friday?

The Newegg Black Friday sale will begin on November 20th, 2017 at 1PM PST.

Since Newegg is an online retailer, deals will be available around the clock until November 25th at 11:59 PST.

If you wish to make a return on a product from Newegg Black Friday deals in 2017, you must first obtain an RMA (Return Merchandise Authorization) number. This is obtain by contacting customer service (which usually responds promptly as Newegg has excellent customer service). All products that are unopened in retail packaging can be returned within 30 days. Open box products may be subject to a partial refund or a restocking fee. Read more about the return policy for Newegg Black Friday Deals here. 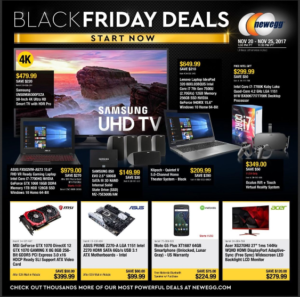