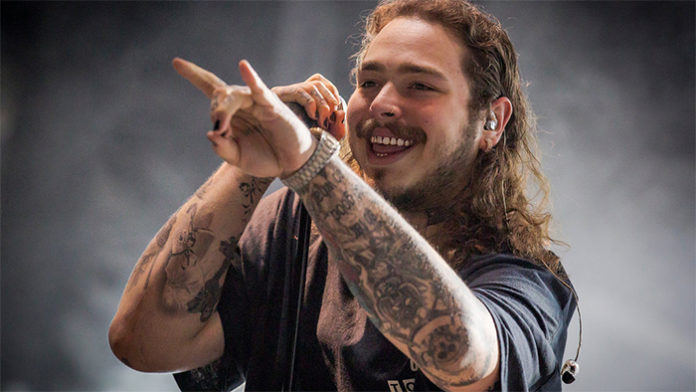 A rapper out of Grapevine, Texas, Post Malone has released several records over the past few years. Ever since he taught himself how to produce music as a teen, he’s been churning out new songs on a regular basis. Emerging from the unknown, he earned a considerable amount of attention from his debut single, White Iverson. Released in the summer of 2015, it reached multiple charts including the US Billboard 200, where it had peaked at number 14. Responsible for his rise to stardom, the track has since gone platinum four times in the United States.

Prior to the end of the year, Post Malone came out with a second track, Too Young– like its predecessor, it eventually received platinum accreditation from the RIAA. From there, the rapper released the single Go Flex, before dropping his debut mixtape, August 26th on May 13, 2016. Featuring guest appearances from Jeremiah, Larry June, 2 Chainz, Jaden Smith, Lil Yachty, and FKi 1st, the tracklist consisted of ten titles, including Hollywood Dreams, Oh God, Money Made Me Do It, Never Understand, and 40 Funk. To date, it remains to be the only mixtape that he has released.

A few months later, he issued his first full-length album, Stoney. Supported by six singles, the rapper collaborated with a few prominent rappers for the project including Justin Bieber, Kehlani, and Quavo. A solid effort on his part, it came with fourteen tracks including, Congratulations, Yours Truly Austin Post, Too Young, No Option, Patient, Feel, and Broken Whiskey Glass. Upon its release, the album sold 58,000 units within the first week; chart-wise, it reached as high as number 4 on the US Billboard 200. Outside of the country, it also charted in countries such as Australia, Sweden, Norway, New Zealand, and Germany. To date, Stoney has been certified platinum in the US.

What has Post Malone been up to this year? Well, he hasn’t released any new albums per se, he did land a couple of features in Watt’s Burning Man and Lorde’s Homemade Dynamite (Remix), the latter of which made it onto the Billboard 200. A little while ago, he also contributed to Candy Paint, a track from The Fate of the Furious movie soundtrack. Aside from all that, the rapper has also been putting on a number of shows this year. More specifically, he has been on a worldwide tour in support of his debut album, Stoney. If that’s something you’re interested in, be sure to check out his official website for more information.

Post Malone rose to fame with the release of his debut single, White Iverson in early 2015. Soon afterward, he landed a music deal with Republic Records.

He is currently 22 years old.

Post Malone was born in Syracuse, New York. At the age of nine, he and his family relocated to the city of Grapevine, Texas, where he grew up and went to school.

Post Malone is currently in a relationship with a girl named Ashlen. Unfortunately, not much has been revealed about her at this time- although many pictures have surfaced on the internet since.

Not much is known about his past relationships at this time.

As a teen, he went to Grapevine High school in Texas, ultimately it was there that he first garnered himself some notoriety with his music.

Yes, he did go to college at one point. After completing high school, Post Malone enrolled himself at Syracuse University in New York. Just a few months into his studies, however, he dropped out in lieu of pursuing his rap career full time.

At this time, we do not have any details on Post Malone’s salary.

In his spare time, he likes playing video games such as Guitar Hero- that and watching the Dallas Cowboys play

His favorite acts include Young Thug and Future

Born on July 4th, he is a Cancer