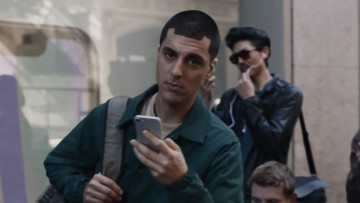 Samsung and Apple are currently the top two smartphone makers and they’ve always had a rivalry when it comes to phones.

Apple recently launched its tenth anniversary iPhone X and it didn’t take long for its rival to make fun of the phone. Samsung’s latest ad makes fun of the notch on top of the iPhone X screen and some of the features from previous releases.

The ad, called Growing Up, starts with an Apple fan getting the first iPhone in 2007. He is then seen taking a picture with his iPhone in 2010 but he gets a notification saying there isn’t enough storage for the photo. The ad continues with him getting the next releases of the iPhone. He falls in water with his girlfriend, who owns a Samsung phone, and his phone gets damaged. For 2018, he is seen using the adapter for the headphones after the company decided to remove the headphone jack from the iPhone 7 and iPhone 7 Plus. Right before the video ends, he turns off his iPhone and decides to get a Samsung Galaxy Note 8. He walks by a long line of people waiting for the iPhone X and looks at a guy who has a notch shaped haircut.

The ad posted by Samsung Mobile USA already has over 2.5 million views. It isn’t the first time that Samsung makes fun of the iPhone but this one includes a lot of the big releases, including the iPhone X.

The ad from the South Korean company makes fun of every little feature that’s not on the iPhone or has been removed. The company didn’t forget about the notch, which is on top of the iPhone X screen. In 2017, many smartphone makers have released phones with screens that stretch from edge to edge but the notch is an odd design choice as it’s only found on Apple’s premium device.

The iPhone X was released on November 3 and Apple has said demand is off the charts. The phone was reportedly sold out in minutes during pre-orders and shipping times were pushed back weeks.