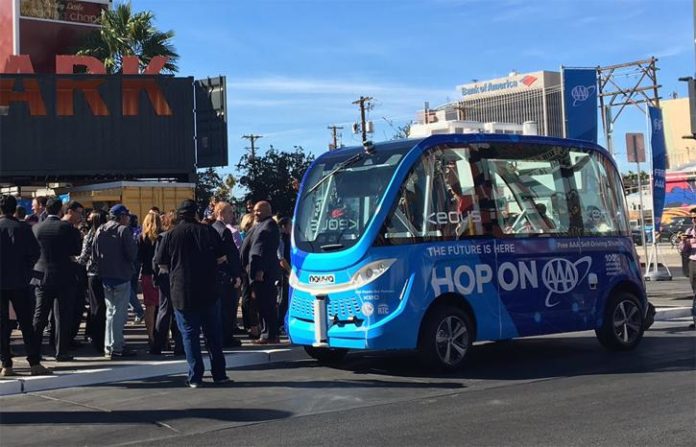 A self-driving bus that made its big debut in Las Vegas was not on the road for very long as it crashed less than two hours later. Passengers say the bus could have done more to avoid it but police said the truck driver was at fault.

The bus began its trip in downtown Las Vegas and many people were there to get a chance to ride the autonomous bus. The debut was cut short after the bus was hit by a truck less than two hours after it began making trips. No one was injured in the minor crash but passengers say the bus could have actually avoided the truck backing its way.

Jenny Wong, who was on the bus when the minor crash happened, told KSNV that the shuttle just stayed still. She added that the passengers were watching as the truck was going to hit them and then it hit them. She said the shuttle didn’t have the ability to move back.

The minor crash interrupted the debut of the bus for some time but police revealed that the truck’s driver was at fault for the crash. He was cited for illegal backing.

A statement released by the city said the shuttle did what it was supposed to do by registering the truck with its sensors and stopping to avoid the accident. The statement added that the truck did not stop and scratched the front fender of the bus. The statement finished by saying that had the truck used the same sensing equipment as the bus, the accident would have been avoided.

The minor crash caused a delay but the bus returned shortly after to pick up more passengers waiting in line. City spokesman Jace Radke said the bus completed two more trips after the crash.

Self-Driving Bus – How Does It Work?

The self-driving bus, developed by Navya, does not have brake pedals or a steering wheel. The bus has an attendant and a computer monitor and guides itself with GPS and sensors. The autonomous bus has a top speed of 15 mph.

Navya is currently testing this technology in other cities too. Back in September, Navya and transport company Keolis tested a self-driving bus in east London. The bus traveled only a short distance and was only available for a few days but it was open to anyone who wanted to get a preview of the future.