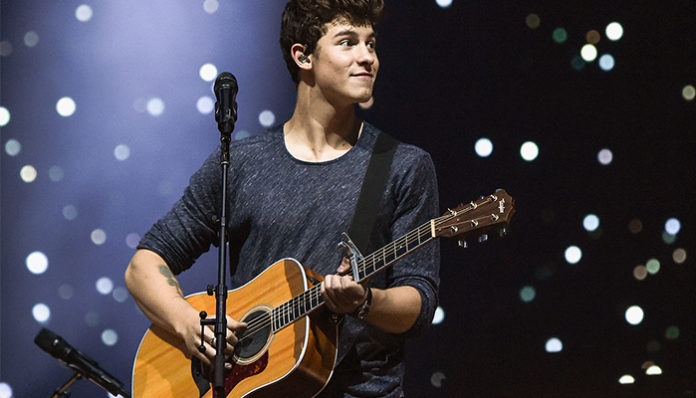 Based in Toronto, Canada, Shawn Mendes initially rose to fame on Vine, to which he posted his cover songs. As his presence grew, he eventually caught the attention of Island Records, who offered him a music deal. Soon afterward, the teen released his debut album, Handwritten in 2015. A considerable hit, it came laced with a dozen tracks including, I Don’t Even Know Your Name, Life of the Party, Never Be Alone, A Little Too Much, and Something Big. A chart topper in the US, the album has since sold over a million copies in the United States- making it his first RIAA-certified record.

His second album, Illuminate was later released in the fall of 2016. As successful as his debut, it debuted at the top of both the American and Canadian Album charts. A blend of pop, rock, and blues music, the record spawned three multi-platinum singles, Treat You Better, There’s Nothing Holdin’ Me Back, and Mercy; also included in the track list were, Three Empty Words, No Promises, Bad Reputation, Ruin, and Patience, all of which were written by Mendes himself. In support of the album, the singer hit the road for an Illuminate World Tour, which kicked off in March 2017- in fact, it is still continuing as we speak!

Speaking of tours, Mendes has headlined a couple of others in the past including the #ShawnsFirstHeadlines Tour and the Shawn Mendes World Tour in 2014 and 2016 respectively. On top of that, he has also opened for Austin Mahone and Taylor Swift. As far as other collaborations go, the teen was featured in The Vamp’s hit single, Oh Cecilia (Breaking My Heart) in 2014. Not only did he contribute vocals to the song, but he also made an appearance in the music video, which has since been played over 57 million times on Youtube!

A talented fellow, Mendes has received dozens of industry accolades throughout his career. For instance, he has won two BBC Radio 1 Teen Awards, a Canadian Radio Music Award, four iHeartRadio Music Awards, and four MTV Europe Music Awards, among others. On television, the singer has also been featured in multiple shows such as The Ellen Degeneres Show, The X Factor, The Tonight Show Starring Jimmy Fallon, Good Morning America, and Conan. As far as acting goes, it looks like he will be appearing in an upcoming musical drama called, BreakThrough. But wait, that’s not all- he’ll also be starring in a comedy film called, Summer of Love sometime in the near future (though details of the plot have not yet been revealed).

Shawn Mendes first rose to fame with the release of his debut single, Life of the Party. A considerable hit, it debuted among the top 25 on the Billboard Hot 100, making him the youngest artist to have achieved such a feat.

Shawn Mendes was born in Toronto, Ontario. Growing up, he was raised in the city of Pickering, where he went to a local high school.

He is of English and Portuguese descent

Is Shawn Mendes in a Relationship?

As far as we can tell, the singer is currently single.

According to a Q&A, he had dated a girl for two years in the past- in fact, he even wrote songs about her! Unfortunately for us curious fans, her identity has never been revealed.

At one point, he was also in a relationship with an older girl, though it later “fizzled out.”

Brought up in Pickering, Ontario, Shawn Mendes was a student at Pine Ridge Secondary School.

Did Shawn Mendes Go to College

No, he has not gone to college. Whether or not he plans on continuing his studies in the future is still up in the air.

At this time, we do not have any details on Shawn Mendes’ salary.

In his spare time, he enjoys playing hockey, football, and longboarding

One Republic, Chance the Rapper

Gimme Love by Ed Sheehan, Cry Me a River by Justin Timberlake

Born on August 8th, he is a Leo