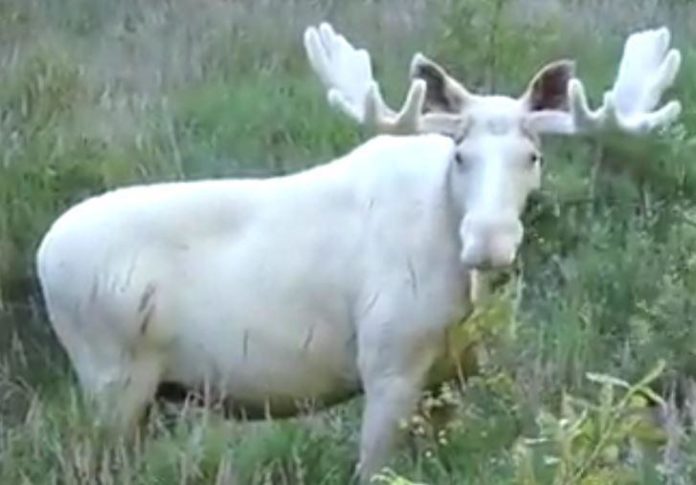 A rare white elk will now be allowed to live in the area after police overturned a decision that allowed hunters to shoot it.

The white elk became super famous back in August, when Swedish councillor Hans Nilsson captured a video of it. The animal attracted many visitors to the area but police later revealed that it could be shot as it had charged at a woman.

Experts warned visitors that the animal could be dangerous. The warnings didn’t stop many as they continued to visit the area to see the rare white elk. Residents actually began complaining that some visitors were now trespassing to see the animal closer.

Police had said earlier this month that the animal would be shot if the plan to chase it away with hunters was not successful. The decision made by police a few days ago led to a petition calling for the animal to be saved. The petition received thousands of signatures in just a few days.

Mr. Nilsson told The Telegraph that the animal has had two turbulent weeks. He said it started with a young woman who was jogging with her dogs attached to a leash on her waist. The dogs began barking at the elk and the elk defended itself by attacking the dogs. The woman fell to the ground and dislocated her shoulder.

Police announced their plans shortly after what happened with the woman. Mr. Nilsson said the petition to save the animal received more than 14,000 signatures. He said the decision was overturned after the reaction by people.

A police official told a hunting magazine earlier this month that some residents weren’t going out because of the elk. Their first plan was to chase it away with hunters but the decision has been overturned, allowing the animal to stay in the area.

The animal is extremely rare, with only a few in the region. According to estimates, there are between 50 to 100 in the area and around 1,000 in all of Sweden. There are around 210,000 elks in the country. The video captured by Mr. Nilsson made the elk, nicknamed Ferdinand, famous right away. The first decision by police wasn’t welcomed by local nature photographers and people across the country.

According to Radio Sweden, this isn’t the first time that the animal has faced an uncertain future. Back in 2014, there were calls to end the animal’s life after it scared a group of school children.