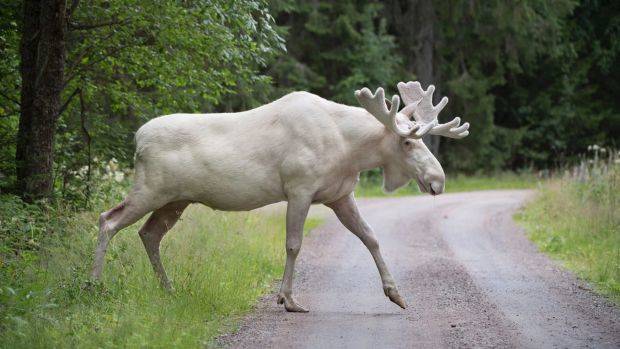 Back in August, a Swedish councillor captured a video of an incredibly rare white elk. The animal quickly became famous around the world. The white elk was spotted by Hans Nilsson, who revealed that he had already seen the animal once the day before.

The famous animal has attracted many people to the area but Swedish media is now reporting that police might have to shoot it because it recently charged at a woman. The Local reports that the decision to shoot the animal was made last week by police.

A police official said they have another plan, which is to chase it away from the area with hunters. The animal will be shot if the plan with the hunters does not work.

The police official told a hunting magazine that some residents don’t go out because of the elk. He added that this is not a pet although many people seem to think so. He finished by saying that the animal may seem tame, but it retains its natural instincts.

The rare animal became very famous after the video surfaced and many have visited the area to see the rare elk. Experts warned shortly after the animal gained global fame that it could be dangerous. Goran Ericsson, a professor of animal ecology, warned that elks can get irritated and that they can be dangerous at that point.

White elks are extremely rare, with estimates saying there are only between 50 – 100 of them in the region. In all of Sweden, there are just 1,000 white elks.

The warnings haven’t stopped crowds from visiting the area to spot the animal. There have been so much visits that a few residents have complained that people are now trespassing to their gardens to get a better look at the animal.

The decision to shoot the animal if the plan by the hunters does not work has led to a petition. More than 1,000 people have signed the petition, which is asking police to change the decision, in just a few hours. Local nature photographer Ingemar Petersson told The Local recently that it’s very sad when you’ve seen the problem for a long time. He added that the decision has been made because the animal is aggressive, but said he had never experienced that.