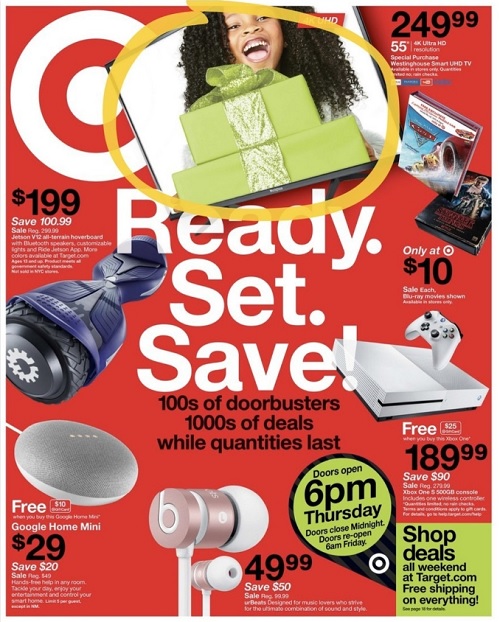 Target was founded way back in 1902 by philanthropist and businessman George Draper Dayton, and since then it has grown to become the second largest discount store retailer nationwide. Target’s only real competition in this sector is the retail giant Walmart, but while Walmart promotes a strategy of always low prices, Target is universally recognized as the best bet for younger, image-conscious customers looking to get a great price on a massive range of consumer electronics and products for the entire family. Now in 2018 Target’s Black Friday promotions begin early, in fact they’ve already started some of their amazing deals weeks before Black Friday 2017 arrives, and even though they’ve given other retailers plenty of time to make improved offers, Target’s reputation as one of the best when it comes to consistently offering the best Black Friday deals guarantees that you’ll be able to pick up some great deals in the 2017 Target Black Friday sale.


Target specialize in offering the latest technology, entertainment and electronic items with big discounts. Last year they offered the biggest discount on the Apple TV, and highly competitive deals on iPhones, iPads and the Apple Watch, so it’s the place to go to if you want the best price for Apple products in this years Black Friday sales. But the deals that Target are offering this year don’t end there, they also offer great deals on a huge range of products that will guarantee you’ll be able to keep the younger members of the family entertained while you get to grips with your cut-price consumer electronics. So let’s take a look at just a few of the juiciest deals that Target are offering this year, and if you’d like to view their full range of offers in the 2017 Target Black Friday sale then simply click on the image at the bottom of the article.

Target has a reputation as one of the best retailers for Black Friday deals on Apple products, TVs, games and video game consoles, and this year is no exception. They offered amazing deals on consoles in 2016 and this year they are offering an Xbox One S 500GB console for $189.99, a reduction of $90. There is a doorbuster deal on the Sony PlayStation 4 1TB console too, it’s available for $199.99, a reduction of $100 from the usual retail price. Both consoles are sold with one wireless controller and are available while stocks last. Additional controllers are available for $39.99, a reduction of $20 and Target will also be offering a huge range of games at up to 50% off the usual cost.

Target have excelled themselves in 2017 with several amazing deals on the latest UHD, LCD and Smart TVs. You can pick up a Samsung 58” 4K Ultra HD Smart TV for just $649.99, or if that’s just too big a picture for you, then the 49” version is available for only $429.99. If you’re lucky enough to live somewhere with enough room to fit a 65” Samsung 4k UHD Smart TV without it blocking an entrance, then you can pick up this giant TV for just $849.99, a saving of $450 on the standard price. Target have a range of offers on LED and Smart UHD TVs by other manufacturers too and are offering great deals on TVs by Polaroid, LG and Element in addition to their Special Purchase deals on Samsung TVs. For those on a lower budget, you can get a Polaroid 32” LED TV for just $89.99, a discount of $40 on the usual cost.

Target offer an enormous range of deals during their Black Friday sales, and there are far too many deals on electronics to mention, but you can also pick up Google Chromecast, Bluetooth speakers, Blu-Ray players and soundbars, all at up to 50% discount from the usual cost. Headphones, fitness monitors and tablet deals are all on offer and Target will also be providing a huge range of Bue Ray titles, all in a doorbuster deal for only $4.

For The Children – Toys and Games


When you’re enjoying your new electronic purchases you’ll want something to keep the young ones occupied, and fortunately Target have some great deals on their toys, games and play kits for children. There is an enormous range of toys from numerous top brands offered at up to 50% off, with some of the deals taking the form of a buy one get one free offer.

There are a number of Lego building sets on offer for $34.99, a 30% reduction in the usual price. There are plenty of toys for younger children, with Tonka Trucks, Interactive Minions, multipacks of action figures, Barbie dolls and Fisher-Price activity sets all at up to 50% discounts, and for the older ones you can pick up a 1:10 scale RC armadillo Truck for just $45, less than half the usual price. If your child has an early interest in DIY you can pick up a Black & Decker play Workbench in a doorbuster deal at half price for only $30.

If you’d like the children, or maybe even your partner to go outside for some fresh air then a Sky Viper Stunt Drone is available for an incredible $29.99, reduced from $50 during the rest of the year. If my partner hasn’t yet taken the hint that the drone is number one on my list, and how could she say that being 40 makes me too old to get one, then I’m warning her now that I could always get a NERF N-Strike Elite Rapid Strike Blaster at Target this Black Friday for just $19.99, so the drone is probably the safer option for this overgrown child.

I’ve only just scraped the surface of the incredible number of offers Target have during the 2017 Black Friday sale, but you can view their full range of offers on scooters, footballs, soccer balls, bikes and other games and toys by clicking the picture at the bottom of this article to see the full 40 page leaked Target ad scan. There are offers galore for both boys and girls, and every age range is well covered. If you have a baby in the house then you can keep a digital eye on them with a doorbuster deal on the Vtech digital video baby monitor while you’re watching your new TV. The monitor boasts dual-cameras, a wide angle lens option and automatic night vision, and is available during the sale for only $89.99, a 50% reduction on the standard cost.

If electronics are just not your thing then Target also have clothing on offer this Black Friday, and as you’ve probably already guessed, there’s a huge selection of items with discounted prices. Ladies sweaters start at just $10 and tees for men and women start at only $4. There are fleece tops for adults from only $15, fleeces for toddlers and children from only $10, and for just ten bucks you can also get some cool looking boots for the little ones too.

Target have a number of great doorbuster deals on vacuum cleaners, with top of the range items from Hoover, Dyson and others all at up to 50% off. If you prefer to sit back while a robot does all the work, an iRobot Roomba wi-fi connected vacuum will do just that, and there’s a doorbuster deal on that too, with a price tag of only $274.99, a saving of $100.

The kitchen can have a robot too, and you can get your morning caffeine fix with the help of a Ninja Coffee Bar coffee maker for only $99.99, which is half the usual price, and Target have a number of other great door buster deals on electronic, programmable and state of the art coffee makers in the 2017 Black Friday sale, with plenty of half price offers. The deals don’t end there, there are utensils, mixers, slow cookers and popcorn makers, many of which are on sale for only $10, half the usual price.

The offers are endless at Target in the 2017 Black Friday sale, there are make-up kits, Blankets and Towels at great prices, and even holiday decorations if you’re thinking ahead to Christmas, and on Black Friday itself, if you spend $50 or more in any Target store you’ll get a 20% reduction on any shopping trip between November 28th and December 10th 2017. The Selection at Target is incredible, so check out the full Leaked ad scan by clicking the image at the end of this article to see them all for yourself.

When does Target open for Black Friday?

Target are already offering some deals in stores and online at Target.com. The Black Friday sale will officially begin at 6pm on Thanksgiving day but new offers will be introduced in the run up to Black Friday on the Target.com Top Deals section. Target offer free shipping on all online orders so if you don’t like crowds and the kind of frenzy that Target’s Black Friday sale is likely to create then you can enjoy the full range of Target 2017 Black Friday deals from the comfort of your own home at no extra cost.

The full range of door buster deals and amazing offers available at Target will begin when the sale opens at 6pm on Thanksgiving day. Stores will be open until midnight on Thanksgiving day, but if you’ve over-indulged and don’t feel like rushing out to pick up an amazing deal, they’ll be opening the doors bright and early at 6am on Black Friday itself. Stores generally will be closing the doors between 10pm and midnight on Black Friday, so check the opening hours of your local Target store on Target.com as opening hours will vary by location.

All of Target’s Black Friday deals will be available online from 6pm on Thanksgiving day, however many of the best door buster deals will only be available while stocks last both online and in individual stores, so if you’ve got your heart set on anything in particular, snap it up while it’s still in stock. Target supply not only their Black Friday Deals on Target.com, but will also be launching many appetizer deals to the main Black Friday event on the Top Deals section of the company website.

Almost all items will qualify for a complete refund or exchange, conditional on the item being returned in new condition and within 90 days of the original purchase. There are some exceptions however so please ask at the time of buying if your purchase can be returned. The Target.com website lists all exceptions to the standard returns policy for online customers.