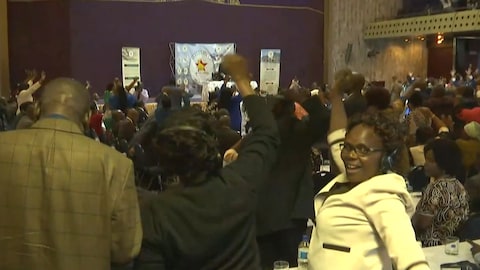 Robert Mugabe has resigned as president of Zimbabwe, the country’s parliament speaker has announced.

The speaker of the parliament read a letter in which Mr. Mugabe resigns. The letter says he is stepping down with immediate effect. The news quickly spread across the country and many took the streets to celebrate.

Thousands of people had marched to his residence last week demanding for him to step down. On Sunday, Mugabe made a live TV address but angered and confused many when he didn’t resign.

After the live TV address, officials revealed that they would begin the process to impeach him on Tuesday. Mugabe had been fired from his political party just a few hours before his live TV address. His wife, Grace Mugabe, along with a few other officials who were close to her were also fired from the party.

The parliament had begun debating on the impeachment process when it was interrupted by the speaker to read the letter. Mugabe was facing pressure from the population, former political party and the military.

Emmerson Mnangagwa, who was recently fired as vice president, urged the leader to step down. Mr. Mnangagwa left to South Africa after his firing but was appointed interim leader of the party on Sunday. The former vice president is said to be the person who could take power now that Mugabe has resigned.

The news of Mugabe’s resignation quickly led to celebrations across the country. The population had already celebrated during the weekend but were left waiting after Mugabe didn’t announce his resignation during the live TV address on Sunday.

Mugabe had been in power for nearly four decades but the firing of the vice president, in what many believe was a move to clear the way for his wife to be his successor, is said to be what caused the military takeover.

The military takeover happened last week and the population had been waiting for Mugabe to resign since. The resignation came just two days after he left people confused and angry during his live TV address.