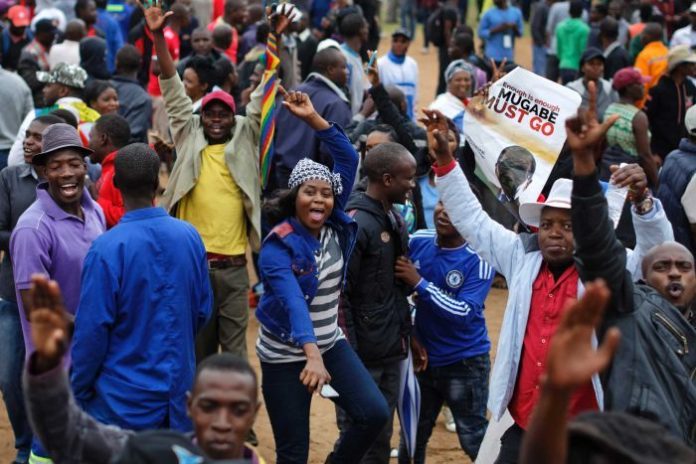 Thousands of people took the streets of Zimbabwe to protest against President Robert Mugabe, who remains at his home. The crowd demanded the president to step down.

The crowd marched towards his residence on Saturday, just a few days after a military takeover left Mugabe under house arrest. The march had the support of military authorities and many protesters were seen hugging and taking pictures with soldiers.

The military has revealed that it does not plan to stay in power. Mugabe is currently under house arrest but has refused to step down, despite the pressure. A lot of the protesters also called for elections.

Mugabe’s time on power appears to be almost over as protesters, the military and former allies want him gone. Just a few hours ago, reports mentioned that the Zanu-PF party is planning to dismiss him on Sunday. Mrs. Mugabe, who many thought had left the country, is reportedly at his residence. Sources told The Guardian that she was at her husband’s residence when the military takeover and house arrest happened. She has not been seen since the military takeover on Tuesday.

Protesters and military want Mugabe gone from power but he refuses to quit. Mugabe’s nephew spoke to Reuters from a secret location and said his uncle and his wife Grace were ready to die for what is correct. He also said that Mr. Mugabe had not slept much since the military takeover but added that his health is good.

Zimbabwe’s ruling party is also expected to remove Grace Mugabe from the leadership of the Zanu-PF Women’s League. The first lady has been a controversial figure for a while and experts say her plans to become vice president and Robert Mugabe’s successor sparked the military takeover. Earlier this month, Robert Mugabe fired his vice president. Experts believe the former vice president is likely to take charge when Mugabe quits.

Robert Mugabe appears to have little options left. He has lost support and protesters are now demanding for him to step down. The meeting by his party tomorrow could mean the end of his leadership. Mugabe has been the president of Zimbabwe since 1987.

Reports say the ruling Zanu-PF party could meet as early as Sunday to begin the process of removing him from office. The party could also reinstate the recently fired vice president Emmerson Mnangagwa.