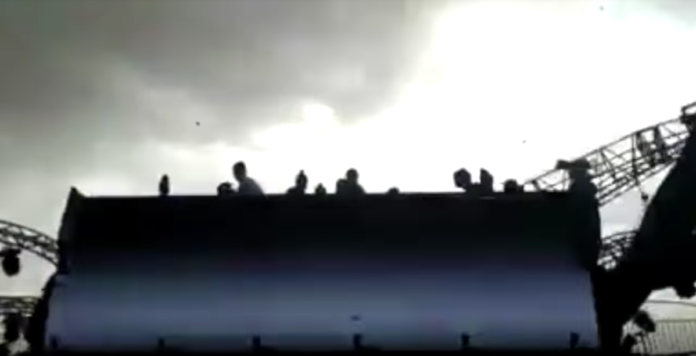 A stage collapse at a music festival in the Brazilian city of Porto Alegre has left one person dead and three others injured. The man who lost his life was DJ Kaleb Freitas, who was performing when the collapse happened. He was rushed to the hospital with head injuries but died shortly after.

The event had around 5,000 people when the stage collapse happened. A video taken by a person at the event shows strong winds moving what seems to be a giant tent in the crowd area. The person then turns back to the stage and it begins collapsing. A second video by the same user shows the stage collapsing from far away. In one of the videos, people seem to be unaware about what’s going on in the stage area. The incident happened at around 2 pm on Sunday.

Authorities have launched an investigation on the event, which went ahead despite the strong winds. Officials have said the organizers had the correct permits to stage the event. An official of the fire department said the festival had taken place in an open area and the speed and strength of the winds was too much for the metal structure over the stage.

Family and friends of Freitas took social media to pay tribute to the musician, who was living in Porto Alegre. Three others were injured during the collapse and were taken to nearby hospitals. Other reports say there are more than three injured.

One video shows people standing in the back completely unaware of the situation. But witnesses say it was different near the stage, where a large screen, metal structure and other objects can be seen falling. One of the people in charge of the location where the event took place said it was madness and that the scale of the tragedy could have been worse. He added that there were things flying all over the place and that there was panic.

The collapse reportedly provoked an stampede near the stage, where many people were watching at the time. A spokesman for the company behind the event said they would assist investigators. The spokesman added that their priority is to assist the injured and their families.

The event was in its fifth year, according to news site Publimetro. At least six other artists were scheduled to perform.