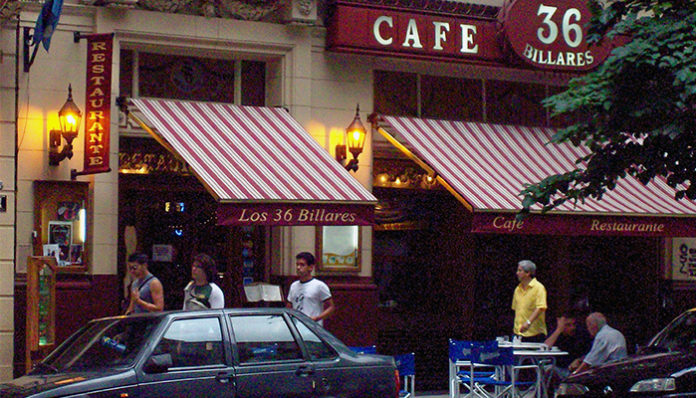 Owned by Terry and Carol Gilmer, Cafe 36 existed as a small family-owned restaurant in La Grange, Illinois. A French-inspired eatery, they served everything from lobster bisque to escargots. Despite their menu, however, the business had not been booming- they only had an average of eleven customers per day, which was obviously not enough to maintain the place. In fact, the owners had no choice but to pour much of their life savings into the company, in attempts to keep it afloat. What was it that led the French Bistro to fail? Wanting to salvage the restaurant, the husband and wife team eventually recruited the help of Gordan Ramsay in an episode of Kitchen Nightmares.

In 2009, the celebrity chef, famous for his frankness, made a visit to Cafe 36. Welcomed by the owners at the door, Gordan was soon seated at a table, where he began to take in the overall atmosphere of the restaurant. For the next few minutes, he flipped through the menu, which was given to him by the waiter. Eventually making his decision, he chooses to order a duck salad, a mushroom risotto, and salmon crepes. With that, he sat himself back in his chair and waited for his order to be completed in the kitchen.

After a hefty wait- well over 40 minutes, the food arrives in what appears to be an old-fashioned trolley cart. The two dishes, the Duck Salad and Mushroom Risotto soon make it to the table- immediately, Gordan notices the old, dusty plates. Despite the owner’s claims of the food being “high above excellence” however, the risotto is described as being “mushy” and “too salty” by the celebrity chef. Put off by his first taste, he asks the waiter to remove the dish- with the request that the kitchen does not try to remake the risotto.

The next up was the Duck Salad. Described as a “bizarre combination”, Gordan was definitely not too enthusiastic about the candied walnuts and strawberries. Much like the previous risotto, it soon made its way back to the kitchen. With that, he requested for the next course- the salmon crepes. As soon as it arrived at the table, however, it was obvious that he was not pleased with its presentation. To make matters worse, the waiter soon told the chef that the crepes were not freshly made, but instead, store-bought. Disappointed, he simply shook his head.

Finally, unable to take any more, Gordan requests a visit to the kitchen, where he is horrified to find out that the risotto rice has been expired for at least a week. From there, he investigates the walk-in freezer where he discovers half-frozen food items floating in the water. When asked about the state of the ingredients, the chef simply replies by stating that they are “fresh frozen.”

Heading back out into the restaurant, he observes a dinner service in which the wait-time for food is horrendously long. Not only that but when the dishes finally arrive, its subpar quality leads the customers to send it back to the kitchen. This ultimately leads Gordan to question why the bistro’s staff is not working together.

Finally, after a long night, Gordan sits down with the owners to discuss the state of Cafe 36. After agreeing to go with whatever the chef has in mind, the couple leaves the restaurant to allow the chef’s team to revamp the place. Working overnight, they adorn the interior with new furniture and colors; not only that, but they also replaced all of the bistro’s mismatched china.

On top of the new decor, however, Gordan also replaced Cafe 36’s old menu, with dishes of his own. “A fresh approach”, the new menu was essentially a condensed, more modern version of what they had served before. Some of the new items included grilled chicken, filet mignon, steak tartar, and wagyu beef. With the reveal, all of the staff seemed relatively pleased. After that came the relaunch of Cafe 36. Prepared with a new menu in hand, they opened their doors for the first, new dinner service.

For the first time in many years, the restaurant was soon filled with customers. Despite the new decor and more importantly the new menu, however, things quickly became backed up in the kitchen as the staff’s “bad habits” returned. As the chefs worked to prepare the food on the burners, the diners eventually began to voice their concern about the wait. Finally, after a period, the dishes started to arrive at the tables. Despite the iffy first impression with the wait, however, the food quickly proved to be a hit, with thumbs ups from most individuals.

After the dinner service comes to an end, Gordan sits down with the owners for a much-needed talk. Grateful for what the celebrity chef has done for Cafe 36, the couple expresses their thanks by presenting him with a bottle of wine from their personal collection. Having done what he came to do, he eventually bids them farewell as he exits the restaurant.

Cafe 36 Now in 2018 – The After Kitchen Nightmares Update

Following the events that took place during the filming of the episode, the owners replaced Head Chef Pinto with Chef Barney, with the former going on to work at another family restaurant in the area (the latter later went back to school to obtain his culinary degree). For a period, Cafe 36 continued to operate in La Grange, Illinois. Despite Gordan’s best efforts to help the business, however, the bistro continued to go downhill, as evident by reviews posted following his visit. For instance, many online reviewers had complained that many of the restaurant’s dishes “were not in stock.”

While some commented that the food was an improvement to what it was like before, the poor economy ultimately forced the owners to close down the restaurant on Saturday, April 18, 2009. As of 2017, a chocolate store called, New Vintage exists where the old Cafe 36 used to be- and looking at their reviews, they seem to be doing fairly well!