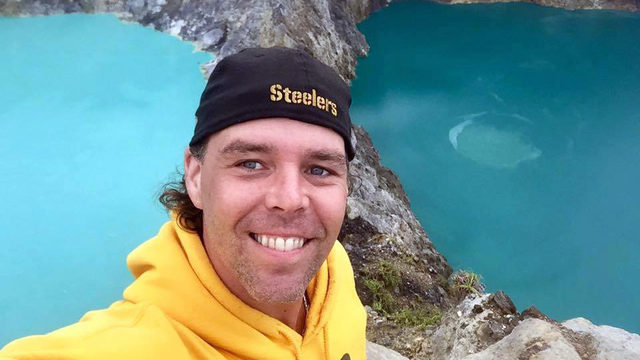 A Florida man is now paralyzed after falling off a rooftop in Bali. The incident happened when Jeff Swedenhjelm chased after a monkey that snatched his Steelers cap. Jeff chased the monkey to get his favorite cap back but during the chase he fell 33 feet to the ground.

Jeff was taken to a nearby hospital, where he is currently fighting for his life. At the hospital, his family members and friends were told that he had suffered damage to his spinal cord. Jeff’s daughter said he had moved from Florida to work in Bali, Indonesia.

Jeff is currently paralyzed from the chest down and friends and family are doing everything they can to have him transported to another hospital. His daughter spoke to the Northwest Florida Daily News and said that he is in bad shape. He is paralyzed but that is not the only thing that he is fighting. His daughter says he also has pneumonia, a life threatening infection that inflames the lungs.

His daughter is worried that he is not receiving the proper medical care since he didn’t undergo an MRI for nearly a day after the fall. He is currently in a medically induced coma and his family is looking to transport him to Singapore, which is located just a few hours away. The family is planning to take him to a spinal specialist in Singapore.

Transport To Singapore and GoFundMe Page

Jeff’s GoFundMe page has raised a little over $55,000 in four days. An update on the page says Jeff is now stable and recovering from the pneumonia. He is still in intensive care unit with a breathing machine but is upbeat. The page mentions that the cheapest option to get him a medevac and straight into surgery is $60,000.