Michigan: What Happens With The Pontiac Silverdome Now? 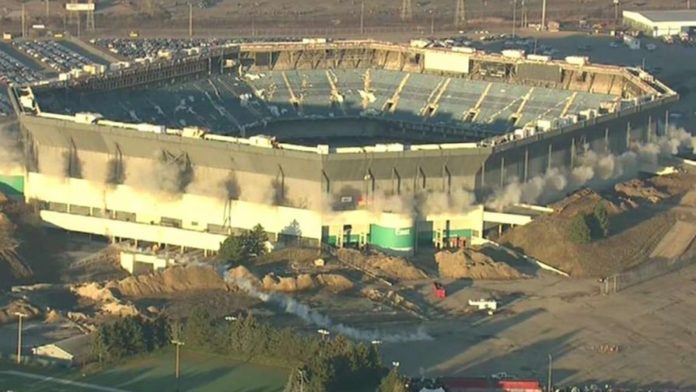 On Sunday, the Pontiac Silverdome survived a demolition and left everyone stunned as it appeared that everything had gone perfectly. The stadium, which was once home to the Detroit Lions, had been abandoned for years and it had been prepared for demolition.

The controlled explosion went around the stadium and smoke was seen coming out of the columns. But the stadium never collapsed and is still standing after all the explosions. The failed demolition has now forced the company to think of other plans.

The failed demolition has left the stadium completely standing and now the company is thinking about how it’s going to collapse the structure. The company is evaluating to see if more explosives could be placed in the area where the explosives did not go off. They are also considering the use of heavy machinery.

The Pontiac Silverdome was opened back in 1975 and was the home to many teams, including the Detroit Lions and Pistons. Many events were also held in the stadium, including four group stage matches of the 1994 World Cup. The Detroit Lions moved to Ford Field in 2002 and the activity at the stadium quickly dropped. There were plans to bring other teams to the stadium but they never happened.

The stadium did see a few events after the Detroit Lions moved but would later be sold for just $583,000. The stadium was reopened in 2010 and hosted a few sporting events, including a boxing match. A roof collapse in 2013 ended all plans.

The stadium was abandoned for four years before it was decided that it would be demolished. Rick Cuppetilli, the Executive Vice President of Adamo, recently said that something happened with the cord that would have set off the charges. He added that there were people trespassing on Friday and taking pictures of the stadium. He said they were chased out by security, who noticed their flashlights. Authorities did not arrest anyone but it is believed that the trespassers may have caused damage to one of the cords. The company has said it will try again next week.