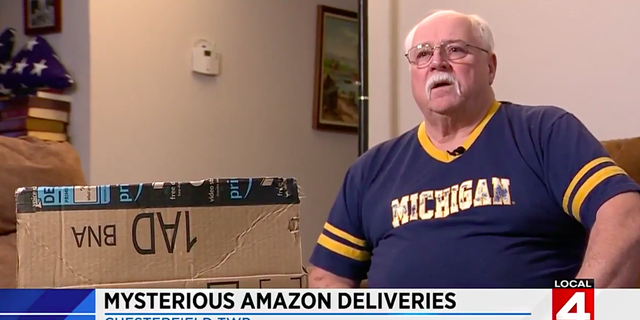 A Michigan man does not know what to do with all the orders he has received from Amazon in recent weeks. Terry Miller, who lives in Chesterfield Township, Michigan, has received numerous Amazon packages but the interesting part about this story is that he hasn’t ordered them.

Getting free packages sounds like something we would all want but so many have arrived to his home that he is getting a little tired of them. Waiting and opening the door to receive a package is a great feeling but Miller is quite annoyed since it hasn’t stopped.

The Amazon packages delivered to his home are not ordered by him so he doesn’t know what’s going to be inside the box when he opens them. The package deliveries have continued and Miller has already made a few calls to get them to stop but nothing has worked. Miller told local media that he has made several calls and can’t seem to get them to stop.

His attempts to stop the packages have been unsuccessful and Miller has no other option but to receive the packages and check the content. The customer or customers behind the orders are using the address, his full name and even phone number.

The fact that someone is using his name, address and even phone number immediately makes it sound like it could be a secret admirer. But that can almost be ruled out with what’s been found in the packages. Miller has received packages that contain things he doesn’t use such as a cellphone accessory and an antenna for a computer.

Miller opens every package to make sure that there is nothing illegal. He also contacted police to report what was going on. Nothing illegal has been found but Miller does the same thing with every package. He is also waiting for something he likes as most contain items he doesn’t really want. One order, which included wireless headphones, almost turned out to be a good one for him but the color of the headphones is pink.

Miller contacted Amazon about the packages and was told that he could keep everything and that he wouldn’t be charged for any of the orders. He told local media that he has thrown away or given away the packages he has received so far. The mystery remains unsolved but there is probably someone out there not happy about their packages being delivered to someone else, even though that person happens to be using the same phone number, address and even full name.