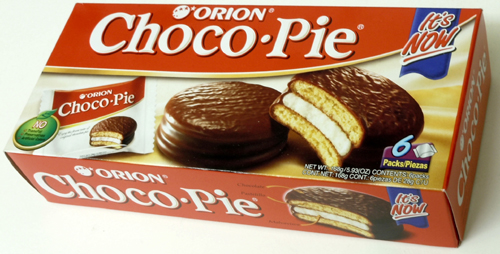 The North Korean soldier who escaped to South Korea through the DMZ will get his favorite snack for free, according to South Korea media. The soldier escaped last month but nearly lost his life when he was shot at by North Korean soldiers. He attempted to escape with a vehicle but had no choice but to run to the Joint Security Area at the DMZ after the car broke down.

During the escape, the soldier was shot five times and he was taken to a hospital in South Korea, where he was in critical condition for days. He told medical personnel after he recovered that he wanted to eat Choco Pies. The snack, which is a chocolate filled with marshmallow, were distributed in North Korea by workers at an industrial park that was run by South Korea and North Korea. After a missile test, South Korea decided to close the industrial park and the snacks were never distributed again. The soldier revealed that he learned about the snack from the industrial park.

The soldier became a big fan of the snack and it was one of the things he said he wanted to eat when he recovered. The snack is available across South Korea but he won’t have to worry about buying one as Orion, the company that makes the product, has heard about his story and decided to provide their snack to him free of charge for life, according to the Korea Times. The soldier doesn’t have to worry about the snack at the hospital either as the company has reportedly sent boxes while he recovers.

The soldier has been recovering for weeks after being shot five times but has already enjoyed some of the things in South Korea, including Korean pop music and movies. He is just one of three soldiers who have attempted to escape through the area in the last 20 years, according to reports. South Korean officials revealed that he was shot at least 40 times. He was shot five times during the escape but crossed through the area and was found under a pile of leaves. Local media recently reported that he wants to get a law degree.

North Korean defectors become South Korean citizens after reaching the country. The majority flee through the border with China, which is less guarded than the DMZ.