QacQoc GN30H Premium USB-C Hub Review: One Hub For All? 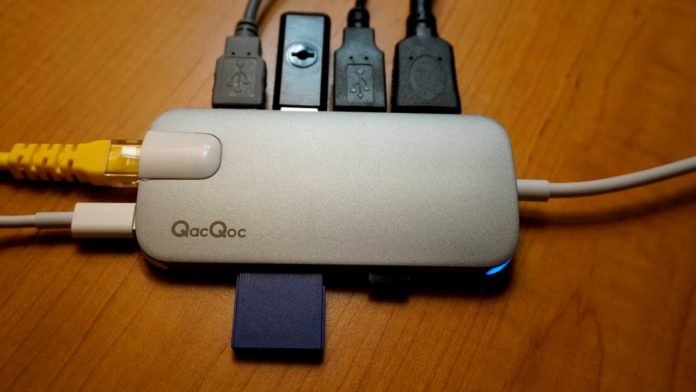 Everyone needs more ports on their computers, right? Whether it’s to charge a phone, transfer data from multiple sources, or just not wanting to swap out wires everytime you need to use a separate device, the idea of a single plug-in point with it all right at hand sounds pretty great. Let’s see if the GN30H can live up to expectations.

What connections does the GN30H Hub offer? 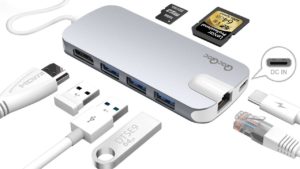 To test out the GN30H properly, I brought along several devices and tools. These included my own laptop ( a Lenovo Yoga), a friend’s Macbook Air, and a handful of peripheral devices including an external phone battery. Considering this product seems pretty geared towards Mac users, I decided to test it on that device first.

For the Mac, this device is about as “plug and play” as it gets. If it did require the download and installation of drivers, I certainly didn’t notice it, and all components worked out great. There was a very slight hang-up on the ethernet function, but that only lasted around 30 seconds before functionality began to kick in.

In regards to my own PC, things got a little more hairy. Unlike the Mac, I had to redownload drivers several times before the adapter worked, though on the 3rd time it did manage to finally click and begin functioning. Thereafter, most of the ports seemed to work out. The external battery charged in around an hour, which is about average for that device, and the only thing that didn’t work out of all the plugs was when I attempted to use a wireless mouse with the GN30H, as it never registered on the computer.

What did QacQoc get right?

In general, this device seems to be one that’s great for and was built for Mac users, and then ported over to work with PCs. All the ports seem like they’d not get easily damaged and can run good transfer speeds for both data and power, and the ethernet port is a nice surprise, especially considering most devices now are dedicated wireless and having to dig out an old school Dell for some technical work really would be a pain.

What could be improved?

As mentioned before, a bit more attention to function for PCs would be appreciated, as it seemed generally less cooperative with my attempts at using it with one than it did with the Mac. Also, though it wasn’t mentioned before, the outer shell build quality left me feeling a bit lacking. The metal frame tended to heat up very quickly, which is great for heat dissipation but had I left it alone for a full afternoon I’d be worried about potential fire hazards. Maybe doing a dual casing with the inner shell remaining the same and then an aluminum outer shell could be better at handling this issue, or even rubberizing the outside a bit so that it doesn’t damage anything else. It makes sense this adapter gives off a great deal of heat, but I believe it could be handled better.

Overall, this hub is incredibly handy, as it takes away the modern problem of computers taking away ports for the sake of being slim. The added ability to transfer data, or video, or carry a wired connection is a great step and I’m somewhat surprised it took me this long to get around to finding a device like this. Despite the heat issues (seriously, handle with care) I’d still recommend this device to anyone who has a need for it, and this recommendation is made all the stronger by the excellent customer service shown by the company after purchase. If you want a low risk, high gain Hub that can be taken anywhere, then the GN30H is a fantastic choice.

You can currently save 35% on your purchase by using the coupon code MLW4H653 at Amazon.com HERE. The coupon code is valid until June 30th, 2018!