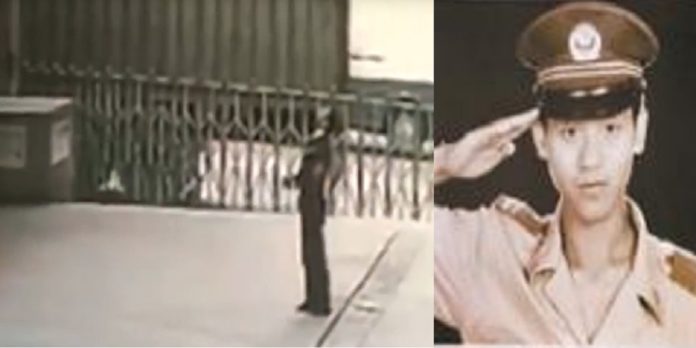 A security guard, who lost his life after attempting to catch a woman as she fell from a building, has been nominated for a bravery award by the company he used to work with. The woman, who authorities believe was trying to commit suicide, jumped from an apartment building in the city of Xi’an. She was living in the 11th floor and witnesses watched as she jumped.

The security guard was one of the people watching and he tried to catch her. The woman and security guard were both pronounced dead at the scene. A witness told local media that the man, identified as Li Guowu, was shocked when the woman jumped. The witness added that the man stretched out his hands to catch her but was knocked to the ground.

According to local media, the woman was standing on the window as the security guard was telling her not to jump. Another witness said he hesitated for a second but then decided to catch her. The witness added that sadly, she hit him with such force that they both lost their lives.

The heroic act has not gone unnoticed among the population. His employer has nominated him for a government award for brave citizens while some people have donated money for his daughter. Over $26,000 have been raised for his daughter and the government will give her an allowance until she is an adult. Mr. Li’s family has also received a $105,000 compensation for his death, which authorities say was caused by the impact of her fall. The company has also offered $750 to the family.

A similar incident happened back in December 2015, when a man caught a woman falling from a building in Enshi City, China. The man heard the woman calling for help as he was walking out of a restaurant. In the video, he is seen stopping and stretching his arms to catch her. The man catches the woman but the impact knocks them both to the ground. The man was injured in the attempt but the woman did not survive. In another incident last month in the commune of Independencia, Chile, a Haitian man saved a woman’s life after she fell from a ninth floor of an apartment building. The man suffered a leg injury from the impact but the woman survived.