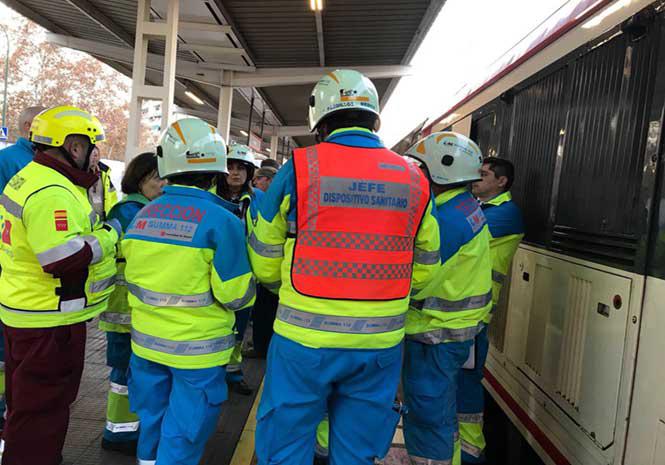 A train crash in the city of Alcala de Henares, located just 25 miles from Madrid, has left 45 people injured. Emergency teams have confirmed that four people suffered serious injuries in the train crash, which happened at around 3:30 p.m. local time.

Authorities say the train crash may have been caused by a failure in the brakes. The railway operator said the train was at its last stop when the crash happened. The train crashed into the barrier at the end of the track.

Emergency teams quickly arrived to the scene and began treating the injured. Some of them were rushed to a nearby hospital. Pictures after the accident show paramedics and firefighters helping the injured at the train station. Emergency teams said that most of the people injured suffered cuts and bruises.

The railway operator and authorities are now investigating the accident. The train service out of the town has not been interrupted but it was announced that there were some delays with the service.

The train crash comes just weeks after an accident near Seville left 21 passengers injured. In that accident, the train derailed in an area far from a stop or town. The injured passengers had to get out of the train and walk. Arahal Mayor Miguel Angel Marquez said it was raining all night and that the fields next to the railway line were flooded. He added that a lot of mud got onto the line and that’s possibly why the train derailed.

The train derailed in an area far from the stop or town and emergency teams had to bring in a helicopter. Reports say passengers quickly left the train after the crash because the fuel tanks were damaged. Emergency teams had a difficult time getting to the injured and the passengers had to walk to reach them. The injured reportedly suffered bruises and fractures. One report said a passenger had suffered a fractured hip.

The accident also comes just days after a crash between a school bus and a train left six children dead in France. Police are currently investigating whether the crossing’s barriers were down or up at the time of the crash. Charges have been filed against the driver of the school bus. Authorities are accusing the driver of manslaughter and involuntary injury.