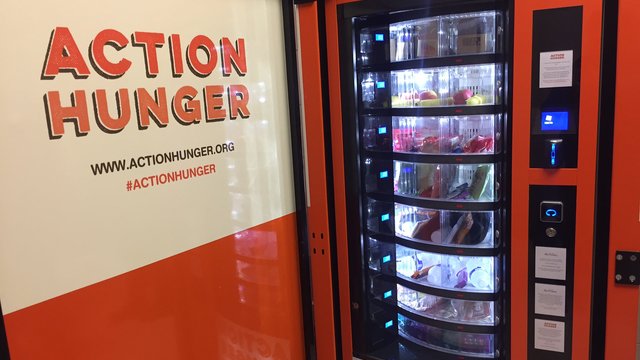 Action Hunger, a charity that helps homeless people across the UK, has installed a vending machine that contains essentials for people living in the streets. The machine has been installed in Nottingham but they plan on placing more in other cities in the future.

The machine was installed at a shopping center and has everything that a homeless person needs. There are socks, lotions, toothbrush, toothpaste and different types of snacks. According to the charity’s site, the food is received from local shops, supermarkets and other charities with excess produce. The site also mentions that they purchase additional items such as sanitary towels and socks.

The new vending machine is exclusive for homeless people and can only be used by those who have a special key card, which is provided by organizations working with charity. The vending machine is programmed to give the person just three items per day. The charity explained that the limit has been done to stop dependency on the vending machines.

The vending machine idea comes from Nottingham resident Huzaifah Khaled, who was shocked by the number of people living in the streets. Khaled believes the machine is the first in the world and explained that they chose that city because it’s where he grew up. He added that they plan on installing one in Manchester in January and then others in London and Birmingham. Vending machines cost more than $10,000 but Khaled spoke to N&W Global, a vending machine manufacturer, and they gave him one for free.

The charity has bigger plans for next year as Khaled has said they want to have 25-30 vending machines by the end of 2018. They also plan to take the vending machines to US cities such as Los Angeles and Seattle. The first vending machine is located at a shopping center but Khaled says the ideal solution would be having them at train stations because they are open for most of the day. He says he has received several emails from other countries interested on his idea.

The new vending machine can be found at the Broadmarsh Shopping Center in Nottingham. Recent figures by the charity Shelter revealed that more than 300,000 people in the UK are currently homeless or living in inadequate homes.