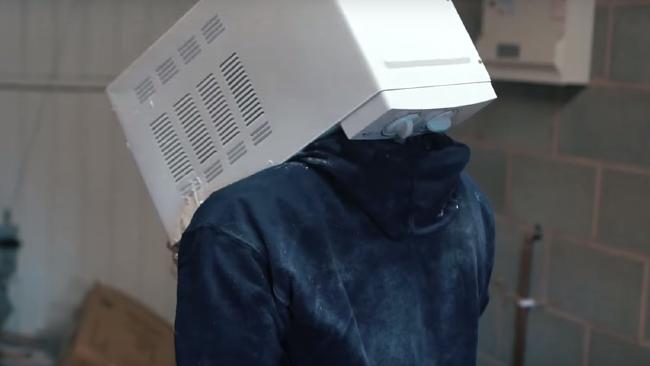 A YouTuber who got his head stuck inside a microwave as he attempted a stunt has responded to the criticism. The prankster, who had to be rescued by emergency services, posted a video of the incident on YouTube but it has been heavily criticized in the comments section.

The YouTuber has now responded to the criticism by saying he doesn’t care. He has also offered to pay emergency services for spending nearly an hour trying to get his head out of the microwave. Yesterday, the fire department said it would not charge him the service fee but he has offered to make it anyways.

For the stunt, the prankster put his head inside a microwave. He covered his head with a plastic bag and then the group used a material to make a mould. The plans went wrong as the microwave got stuck on his head. The group spent more than an hour trying to remove the microwave from his head but their attempts were unsuccessful. They then contacted emergency services, which spent nearly an hour dismantling the microwave and doing everything to make breathing easier for him.

The stunt has been heavily criticized since the news and video surfaced just a few days ago. Social media, YouTube comments section and other YouTubers have reacted to the stunt, calling it stupid and a waste of time for emergency services. The YouTuber was not injured in the stunt but emergency services say this could have led to serious injuries or even his death. At one point, his friends used an air tube to help him breathe. A fire department official said the process of removing the microwave was tricky because most of it was welded. Five firefighters were sent to help, according to a tweet by the fire department.

The video of the incident now has nearly 2.5 million views after two days. Over 23,000 people have commented on the video so far. He recently spoke to the BBC and said the idea behind it was to create this reaction. He added that in his opinion, there is no such thing as bad publicity. According to The Guardian, the video has been demonetized, which means the channel will not make any money from it. The fire department recently said it would not charge the service fee because his life was in danger.