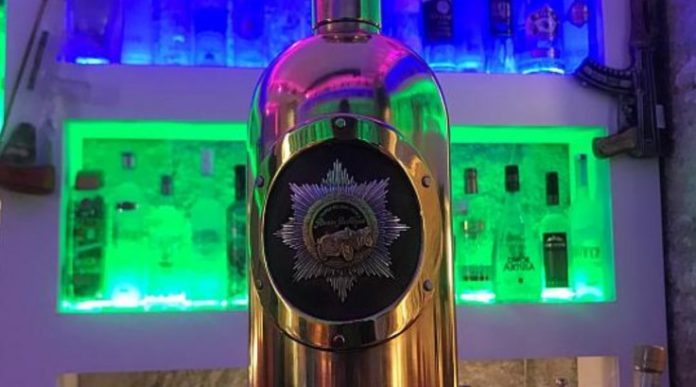 A Danish bar is now missing one of its most expensive parts of its collection after a thief entered the place and stole a vodka bottle worth $1.3 million. The vodka bottle, which is made of silver and gold, has a cap with diamonds. The Russo-Baltique bottle didn’t actually belong to the bar but was being displayed there since the place has a collection of vodka bottles.

Security footage shows a man looking around the collection with a flashlight. He has his face covered and is wearing a cap. He looks around for a few seconds before finding the bottle. He runs to the bottle, grabs it and leaves the bar.

Police do not yet known if the thief broke in or had a key to enter the bar. From the video, it appears that he is only interested in that bottle since he looks around for a few seconds before finding it, grabbing it and running away. The theft happened on early Tuesday.

Brian Ingberg, the owner of the bar, told local media that he had loaned the bottle from the Dartz Motor Company, a company that sells luxury and armored vehicles. He mentioned that the bottle had been part of the collection for half a year.

The bottle, created by Russian car maker Russo Baltique to celebrate 100 years of the company, was unveiled back in 2015. The bottle is covered in gold and silver and the cap is encrusted with diamonds. It has almost seven pounds of gold and nearly the same weight in silver. The bottle actually made an appearance during a season 3 episode of the House of Cards series. In the episode, the bottle is given as a gift to the US President.

The owner of the bar has also shared closer photos of the suspect, who covered his face and wore a cap. Authorities don’t know how he entered the bar but one investigator told the Associated Press that it does not appear that any other bottles were stolen. In the security footage, the thief is seen looking around before grabbing a bottle.

The Facebook post by the bar owner is also offering a reward for the return of the bottle or information that can lead to the capture of the thief. The bottle was not insured and had been loaned to the bar owner to display on his collection, which has more than 1,000 bottles.