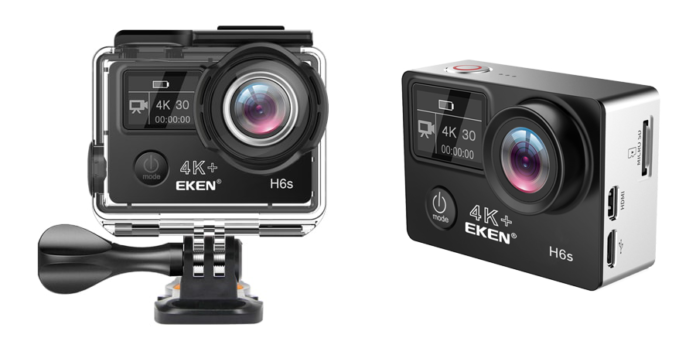 If you’ve been paying a good deal of attention to the action cam market, there’s a good chance you’ve heard of EKEN. Based in ShenZhen, China, EKEN has been seeking entry into the U.S. market for some time, and with the motto of “keep moving forward”, it appears that as of late it has been able to with high quality products at a great price point. But can their latest offering step up to the plate against the likes of giant action cam companies like GoPro? Here, we’ll take a look at the H6s Ultra HD Action Cam, and see how it stacks up against the competition.

So as many of you may do, I decided to order the H6s from Amazon and since it was eligible for Prime, got it in only 2 days, which is always nice. Out of the box, it appears to looks the same as nearly any other action camera, which included listing a good deal of features that we’ll touch on in a bit. The camera itself sits on an accessory box, which includes a very small manual and two smallerboxes which include a Velcro wristbrace, charger, charging cables, and tripod. The action camera can be charged using a standard US plug.  Included in the second box was yet another lanyard, angle plates, a remote control, adjustment tools and adapters. 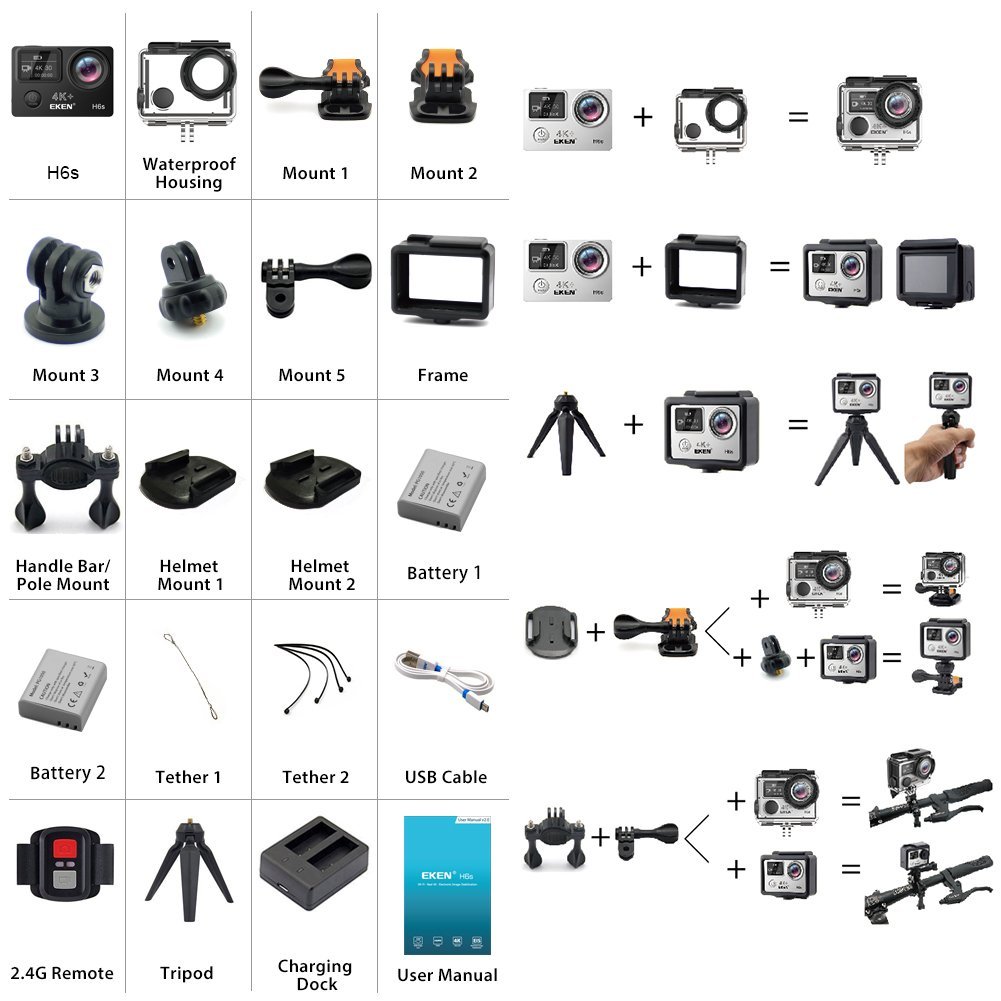 All told, accessories including the case for the camera itself probably makes up more than 3 quarters of the price if it was bought for another brand. At a price of $120 plus shipping, it looks like it could be a good deal so far. The camera itself is rather small, even for an action cam, and the H6s is made of a heavy duty plastic with metal touches on the sides.  Surprisingly a pretty nice look and substantially stronger than previous iterations. On the back panel, you may notice a sticker. Be sure to pay attention to it, as it states only high speed SD cards should be used with the EKEN H6s, as writing images to 4k on normal SD cards can usually cause a crash due to there being a memory malfunction. In terms of battery charge, going from empty to full takes about 3 hours, which while not the best, is certainly not the worst. Do keep in mind that due to the small size, battery capacity is limited. With that said, let’s take a look at some of the technical performance aspects of the EKEN H6s.

With the unboxing and accessory aspect out of the way, let’s take a look at the camera itself. Let’s start with the front, which features a small front screen that displays batter life, resolution, frames per second and whether EIS is active. EIS, or Electronic Image Stabilization was actually one of the shining features of the H6s, as when it did work, it was capable of stabilizing images even while being held after a jog. It does not work however if either your resolution or frames per second are too high (for instance, it can work in 4k, but you have to be recording below 30fps). The back screen has a similar functionality as most digital cameras with a viewing portal, and a menu with your typical options such as burst mode, time lapse, etc. One problem I ran into was that when playing around with the menu, I sometimes clicked through faster than the camera could register, so taking it slow is needed. Now, one feature I happened to miss was when traveling out to check its ability to track nature footage, was that there’s no default cap on the lens to protect it. I was able to remedy this with a bit of gauze and tape, but if you mind your camera looking like a trauma victim, then it may be more of a hangup for you. 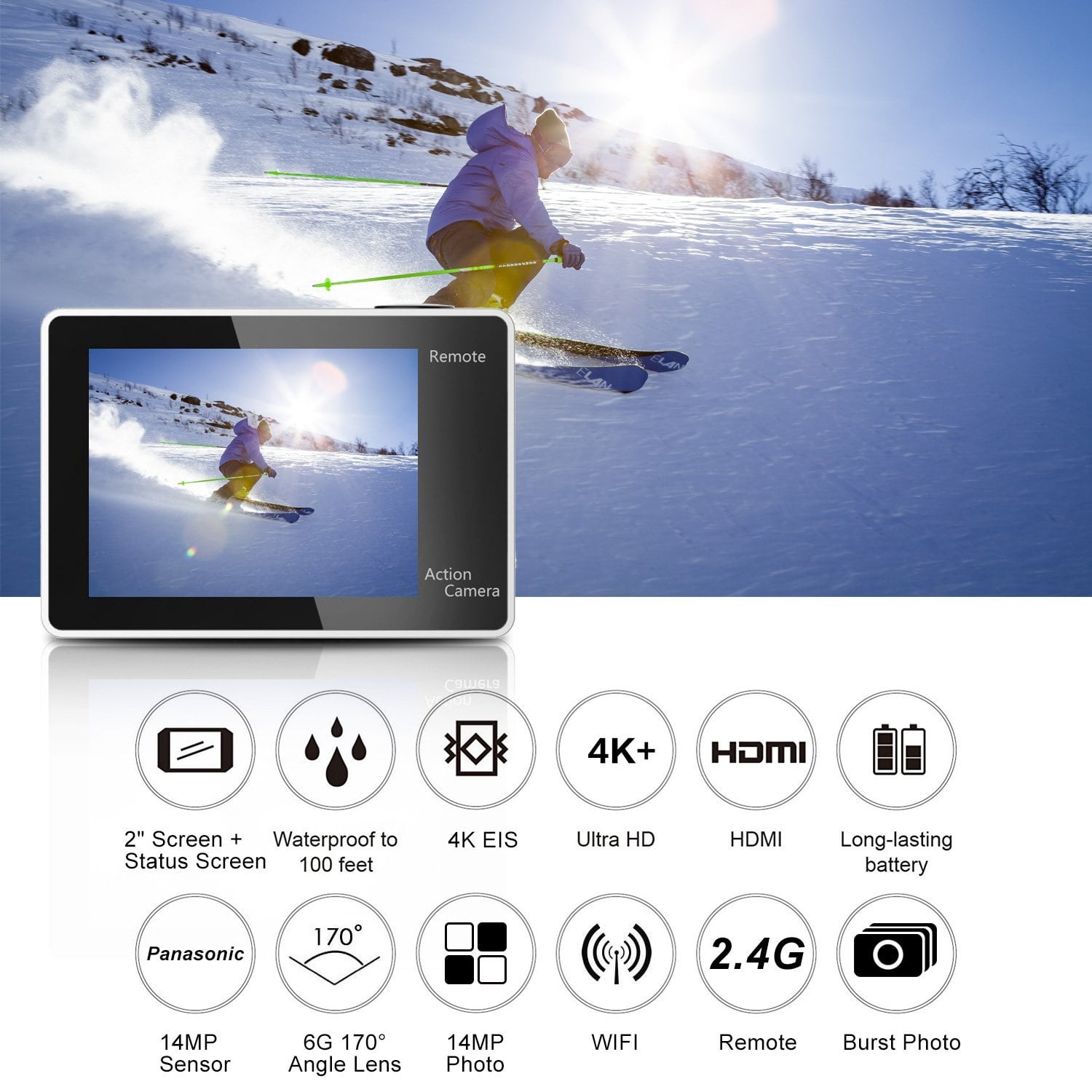 When I did get out into the field, I decided to play a bit with both EIS and resolution scales. As mentioned earlier, EIS required slower FPS or lower resolution. As it happened, 1080p at 60fps with EIS was by far my favorite setting, though it didn’t work well later when I went to upload the footage to a bigger screen. 4K expanded fine to an over 20 inch screen, by contrast, but with my shaky hands I imagine it could cause some motion sickness. In general, the camera did a great job for what it is, and you really should experiment to find the perfect settings for what you want to do. If you’re surfing, for example, maybe 4k at 60fps will be ideal. If dirt biking or mountain biking, maybe 4k at 25fps with EIS will be ideal, that’s totally up to you. Regarding the 100 foot waterproof rating, I was unable to prove that to any real degree. However, with my trusty fly fishing rod, plenty of wire and some jerryrigging, I was able to put it under about 5 meters of river water. Unfortunately, due to the excess murkiness due to silt runs, I cannot speak of the underwater image quality. What I can attest to though is the ability for the camera to survive such conditions for an extended period of time, and the subsequent wash off. I will admit the results of this test disappointed me, as I was curious how the 170 degree underwater view would look given the decent lighting conditions.

Overall, the EKEN H6s is a pretty impressive piece of hardware for the price. Featuring 4k resolution, up to 60fps, and in most conditions, Electric Image Stabilization, this can work as a good general purpose action cam, from skateboarding to surfing to being a dash cam. Image quality and ability to transfer images and video seem more than adequate for an entry level action cam, though this by no means should replace any other class of recording equipment. Overall, the accessories included are fantastic, and arguably can be worth the purchase price alone. Considering most cameras at the same caliber are around double the price, there is no way I wouldn’t recommend the EKEN H6s, despite it not quite having the name recognition of other brands. All in all, if you’re looking for a great action cam for a novice price, it’s worth picking this one up.

To get the best current price on the EKEN H6s you can Click Here.

You can use the following coupon code to save even more money on the EKEN H6s!

Also be sure to check out the official website at https://www.eken.com/