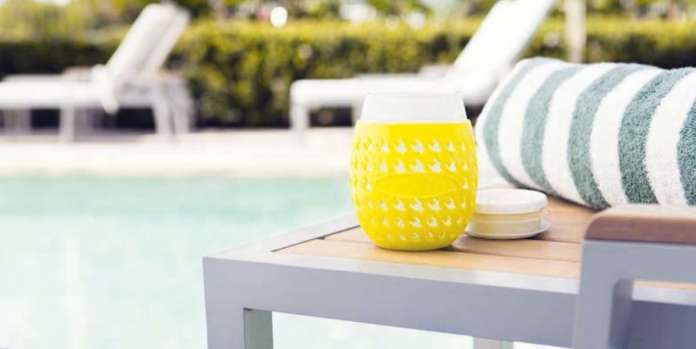 Shannon and Regan, the two working mothers behind Goverre, both had kindergarten age children, and jobs that they were looking to leave. According to an article on Forbes, one day, Regan’s son accidentally tipped a cup of wine over at an outdoor event. This was a eureka moment for the mom – what if they could come up with a wine cup that you could bring to outdoor events, or use in daily life that would be more spill proof? The two came up with the Goverre, which is a stemless wine glass with a silicone sleeve and a sippy top.  The two friends were able to put up the $15,000 that they needed to get a prototype. They were unable to get the interest they needed to make their first Kickstarter goal, but their second campaign was a success. Let’s see if the Sharks would be as engaged in this interesting new idea. 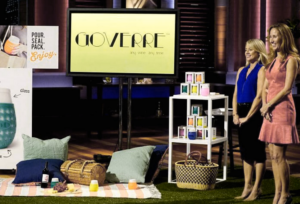 Regan Kelaher and Shannon Zappala began their presentation with their audition video. They introduced themselves and said that their business was founded in San Diego. The two moms met one day on a school field trip with their four-year-olds. As they said, after a long day with 40 4-year-olds they were ready for a glass of wine. They went out together and never looked back. Both of them had worked in corporate jobs for years, and they were both looking to do something different. They would meet about once a month for happy hour and discussed moving in different directions with their careers. That happy hour began to morph into a business meeting. Finally, they found something that sparked their interest and passion.

The entrepreneurs found themselves in a bind. The product was selling really well, but they were unable to keep up with the demand. Their retailers were starting to get irritated. Goverre did not have the funds to fill those orders or the inventory. Both of them were finding that it wasn’t easy to run both the business and the family. They were looking for an investment from the Sharks in order to help grow the business into a successful one.

The two entrepreneurs walked out onto the stage, and into the Shark Tank. Regan and Shannon introduced themselves and their company. They told the Sharks that they were there today seeking $200,000 in exchange for 13% equity in their business. Shannon started off, stating that they believe that everything is better with wine. She listed off places that were better with wine such as picnics, or pitch meetings with investors. Shannon continued, stating that they didn’t love putting it into plastic cups and then spilling it as soon as they set it down. She thought that she could find a better option, and that was why they invented Goverre.

Regan informed the Sharks that their invention was the only portable wine glass with a sip through lid. As she spoke, Shannon was opening a bottle of wine, and pouring it into a Goverre glass. Regan said that the process was as simple as pouring your favorite wine into the glass, putting the lid on it, placing it in your bag and taking it to the next outdoor event where alcohol was welcome. She said that the best part was that it wouldn’t spill when someone knocked it over. Regan called it chic and durable, and it holds 17 ounces of your favorite wine. Shannon told the Sharks that it was half a bottle, which they seemed very surprised by. She ended the presentation by telling the sharks to say goodbye to plastic cups that spell, and say hello to Goverre.

Shannon asked the Sharks who was ready for wine, and they all enthusiastically replied. Robert asked if it was essentially a sippy cup for wine. Shannon agreed, stating that it was essentially a sippy cup for adults. Robert asked what kind of wine they would be having, and they had brought personalized wines for each shark. Robert got a Sauvignon Blanc, Lori got a Pinot Noir, Kevin got a Cabernet, Daymond had the Zinfandel, and Mark Cuban got Mad Dog 20/20, which is a special wine that is 13% alcohol by volume.

Lori looked hers over and asked what type of class the Goverre was, and how easy it was to break. Shannon explained that it was a white soda lime glass which was about twice as thick as a normal wine glass. That alone made it very durable, and that it also had the silicone sleeve for extra protection. Kevin seems surprised that it worked. Daymond wanted to know why someone would need to carry it. Regan explained that was good for people to take out on their boat, to a picnic, or to a concert in the park.

Robert wants to know why they would just make it out of plastic. Shannon explained that wine didn’t taste very good out of plastic. Mark agreed and asked Robert how he could not know that. Kevin, the Sharks’ main wine connoisseur, stated that when you put your hand on the glass, it heats up the wine, and then releases the beautiful nectars into your nose. Kevin turned to the women and said that he would give them the benefit of the doubt. He wants to see exceptional sales since they were valuing the business at almost $1.5 million.

Kevin wants to know what sales would look like by the end of the calendar year. Regan explains that they made $384,000 this year, and they were at $134,000 in net profit. Robert asked if they were taking a salary, but Shannon explained that everything that they made goes right back into the business. Kevin pointed out that if they were paying themselves to normalize salary they would be just breaking even. He said that it was a good hobby, and he wants to know if there is anything proprietary about it. Regan insisted that there was. Kevin wants to know why it was worth $1.5 million.

Regan told him that the exciting thing about Goverre was that they had a really strong patent. Robert looked incredulous, asking if they had a patent. Reagan said that they had pending utility patent. They would be the only company that can put a drink through the lid on a concave glass. Lori wants to know if the patent was only on the sippy cup top. Regan said that they left it vague enough that they can put any spouts were drinking mechanism through the lid. Daymond said that he was really a beer and vodka drinker. Regan told him that he could put anything in it. Daymond said that he knew, but it was not his space. He couldn’t get excited about it, so he went out.

Kevin wanted to know if they were ever planning on making a clear glass that they could see through. Regan told that they want to make Goverre more accessible for big-box stores, and that was one of the options on the table. Kevin said that he loved it, and wanted to make an offer. He offered them $200,000 in exchange for 33 1/3% equity stake. He asked them if they were 50-50 partners, and they said that they were. He said that he wanted to be an equal partner because he was so valuable in the space it was ridiculous. Both Regan and Shannon looked really excited. Regan said that she wants to hear what the other Sharks had to say, and Kevin said that he didn’t and that was the problem.

Among jeers from the other Sharks, Kevin said that he made them a very fair offer. He’d give them the value of Mr. Wonderful and his great wine Empire. Daymond told them that if no one else was interested then they might have to settle for that. Regan asked him if he would be willing to do a deal for 15% equity. Kevin said no. He told them that they didn’t realize that they were playing in the big leagues yet.

Before he could continue, Robert jumped in. He told them that he liked the product, and thought that they had a perfect partnership. Robert said that he would love to do a deal with Mark and Lori. Mark smiled and said that it was just to beat the hell out of Kevin. Lori and Mark both said that they were in. Kevin said that he would raise his price, and Lori told him that they would squish him like the little cockroach that he is. As the three other Sharks conferred in the corner, Kevin attempted to say that they wouldn’t sell anything because Lori, Mark, and Robert didn’t know anything about wine.

After talking it over, Lori came back as the spokesman for the three-man group. She said that they decided to offer the same offer as Kevin. The entrepreneurs would get three Sharks at 33 1/3%. They briefly decided to negotiate down to 25%, but the Sharks weren’t having it. Robert said that they were getting impatient. Daymond looked worried at the folly. Regan finally said that they would love to do business with the three of them after much discussion.

Goverre in 2018 – the After Shark Tank Update 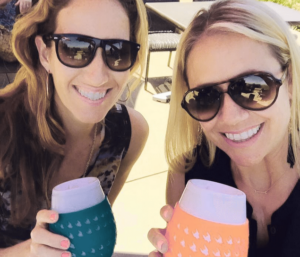 Once their episode aired on Shark Tank, their online store absolutely blew up. They made six months worth of sales in just one weekend. They told Forbes that they’ve been using the $200,000 they received as an investment to increase their cash flow, as well as using the fund to purchase inventory. It hasn’t been long since their episode aired, but they seem to be growing every day. You can find your very own adult sippy cup by clicking here.