In 2010, a student at North Illinois University was found brutally murdered. Two of her classmates, Joe and Adam, were inspired to start a business called Guard Llama. It would help give information and the exact GPS coordinates to the police in the case of an emergency. According to the About Me section of their website, they named their business after actual guard llamas, who protect goats and sheep on farms. 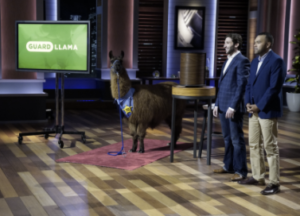 Joe Parisi and Nick Nevarez walked out onto the stage, and into the Shark Tank. They had an interesting special guest with them – an actual llama. They walked the llama to the side of the stage as the Sharks whispered among each other excitedly. They introduce themselves and their business and said that they were seeking $100,000 in exchange for 5% of their company. Joe explained that Guard Llama was a state-of-the-art personal security platform that provided reliable security in daily life.

Joe said that their business was much like an actual Guard Llama. They were docile and unassuming at first glance, but once a predator approaches that all changes. Apparently, llamas are aggressive and will charge predators head-on causing deadly force. Nick told them that they were now able to own a Guard Llama of their very own. He said that he wasn’t talking about the animal on the stage, but rather a wireless Bluetooth remote.

The Sharks all groaned in disappointment. Nick said that they believe that it was unrealistic to think that someone would have time during an emergency to actually dial 911, and have a two-minute conversation in order to get help him away. They said that they took it upon themselves to update the process.

Joe says that customers could visit their website, and purchase one Guard Llama for every person that they loved including themselves. The remotes arrived in the mail along with instructions on how to set up a physical profile. The information is given to police during emergencies so that they can identify you. Joe stated that when an emergency occurs, the user could double tap the button on the GPS remote in order to automatically activate the Guard Llama system. That prevented people from digging around in their pockets to search for a cell phone.

The device also would allow police to have a full profile of the person, and know exactly where they were in under 30 seconds. Nick ended the presentation by requesting that the Sharks invest in them, and help guard millions of lives with the Guard Llama. Lori requested samples and asked if they were passing out anything. Nick went behind their display to get the basket of sample Bluetooth devices. Chris Sacca said that he felt a little bit let down. He thought it was going to be about sending llamas to all these farms to guard them, and he was super intrigued.

Joe stated that he didn’t think the margins were as good on live llamas. Barbara asked if llamas were actually good guard animals, and Nick explained that they were phenomenal. Joe cut in, stating that they charge people and make scary noises while they do it. Kevin played with the Bluetooth device and asked if it connected to the user’s phone. Joe said that it did. Kevin asked the logical follow-up question, which was if the user had to have their phone on them in order for it to work.

Joe said that the device worked within 150 feet of your phone. Mark asked if it links to the phone which initiates an app. Joe said that it did, stating that they had an emergency dispatch center in Springfield Illinois that was staffed. Mark wants to know how many customers they had, and where they were selling. He wanted the economics of the business basically.

Joe explains that the product went live the previous September. They had 2000 users at this time. He explained that they sold the Guard Llama subscription for $10 a month or $100 for the year. Mark wants to know how they were currently acquiring users. Joe explained that they had two different customer acquisition strategies. The first strategy was classical online digital, while the other was in-person sales. Both of worked out really well for them. They had a partnership with the National Association of Realtors. That partnership will let them sell the Bluetooth devices to an at-risk population – realtors that were going into strange places with people that they didn’t know.

Lori wants to know more about how worked. She held and pressed hers, asking if all people had to do was press the button. Joe explained that people would have to press the button twice. At that point, it works like a home security system, where the service would call you and if you didn’t answer the police would be dispatched. If you answer it, it would give you the opportunity to enter a disarming PIN number.

Kevin wants to go through a scenario where you might use it. He used the example of someone being robbed. If your phone rings and the robber tells the person to answer their phone and realizes that the person has activated system the robber would tell them to disarm it. Joe explains that at that point you could enter any PIN code and except the actual PIN number, and it will say “thank you for entering your disarm PIN have a great day.” The thief would think it had been disarmed, and the police come anyway. Joe said that they would now be able to communicate the police that they actually entered a distress PIN, where the user went out of their way to confirm an incorrect PIN.

Lori asked about its use at colleges. She was trying to think of places where it would be easy to get sales. Kevin said that colleges would be a great idea. He also stated that there is a competing system for elderly people where it was a blue box and you could tell it that you fell and you can’t get up. Joe insisted that that product had an inherent flaw in branding. No college student would walk around carrying a Life Alert. Nick spoke up, stating that he could guarantee the Sharks that the product would sell.

Mark said that he could see it being an easy sell. He stated that he liked everything about the company except for the product. He said that the product was horrible. He said that at the time they only had 2000 users, but once that user base crept up someone would have serious consequences. The minute one of those people had serious consequences because they didn’t have it or they turned off their GPS, or they didn’t have their phone on them something could go wrong and they could be liable. Mark Cuban went out.

Lori went up next, stating that she thought that it was a great product and a great idea. She said basically the same thing. If it didn’t work in just one instance, and something happens, it would be a liability nightmare. She also went out. Kevin pointed out that as the Sharks were going out, the llama was pooping on stage. He asked them how they thought their pitch was going.

Kevin said that the trouble with the deal was that 5% of the startup when they were asking for a $100,000 investment made their valuation $2 million. It didn’t make any sense to them. Kevin was willing to make them an offer, but he is going to restructure the terms. He couldn’t get up in the morning for 5%. He told them that he is going back to a classic royalty deal that he made legendary on Shark Tank. Kevin wanted five dollars every time they sold the subscription until they paid back the $120,000. Once that was done, the royalty would stop. At that point, Kevin would get 5% of the business. Kevin said that he was worth it big time. The llama snorted at him.

Joe thanked him for his offer. Barbara asked if that was him accepting, but before Joe could reply, Chris Sacca cut in. He said that he got where they want to go with it, but the direct sales model was a nightmare and hard to scale. He said that he realized it had been successful for them so far, but it wasn’t investable for him. He said that they didn’t do anything proprietary except for a button, so he went out.

Joe said that the week prior to the filming of the episode, a woman died because she was in the trunk of a car and no one was able to find her. She is on the phone with the Sheriff, and they still weren’t able to find her. Kevin asked how their products would solve the problem. Joe explains that they would be able to use GPS to find a person the same way that Uber does.

Barbara said that she had a personal connection to the product. A year and a half before, her brother had been in a motorcycle accident. It was two days before they could find him. She had been shocked that local officials could not tap into his GPS. They said that federal privacy law forbids that. She said that she thought there is a real need for their product. She was going to make them an offer. She offered them $100,000 loan at no interest in exchange for 20%, and she wanted $2 per sale until she recouped her money and then it goes away. She thought that the biggest part of the business was the panic button. The fact that they got the realtors involved was low hanging fruit.

Barbara said that she knew that space because she was the sweetheart of all the realtors. If she was involved in the business, she would sell like crazy. Kevin pointed out that they would have to pay 20% equity and that was a lot. He was going to stick with his offer. Joe asked if Barbara would be willing to do 15% equity. She said that she wouldn’t, but you be willing to do 18%. The llama made a noise, and Joe decided to take Barbara up on her offer. The pair walked off the stage without the llama. Let’s take a look at how they did after making that deal. 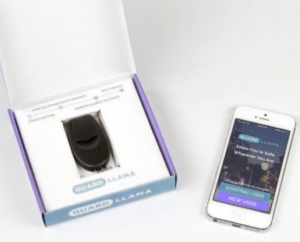 After getting a deal with the sweetheart Shark and realtor, Barbara, Guard Llama has been all over the news. The pricing has gone up a bit since the Shark Tank episode aired, moving from $10 a month and $100 a year to $15 a month and $180 a year. They are targetting all the people who work along in potentially dangerous situations, such as car salespeople, home healthcare workers, and property managers. According to their website, they’ve partnered up with a bunch of companies besides just the National Association of Realtors, including Mace, a brand of pepper spray.