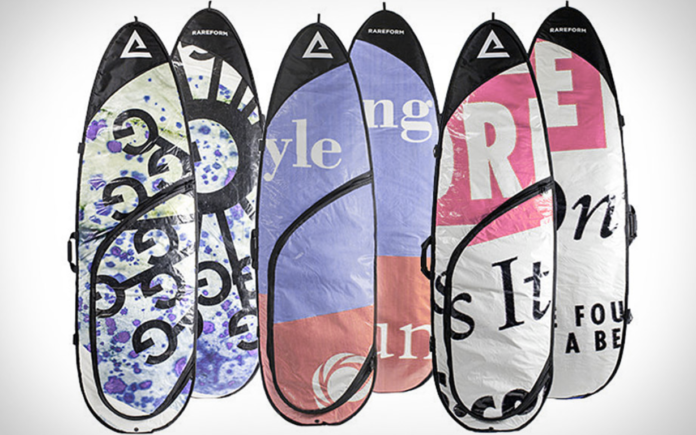 Alec got the idea for RareForm when he was living in El Salvador. He was buddies with a guy who had a bad made out of billboard material. The locals also used it for shelters. He decided that he need to have a surfboard made out of the heavy vinyl that’s used in billboards. He made one, and the response was so great that RareForm was born. Let’s see if the Sharks would be as intrigued by this product. 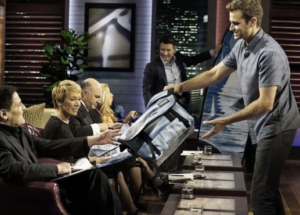 Alec and Aric Avedissian Walked into the Shark Tank, and on the stage. They began by introducing themselves and said that they were from California, and their business was known as RareForm. They told the Sharks that they were seeking $300,000 in exchange for a 10% equity stake in their company. Alec began the presentation by asking the Sharks to picture themselves driving, and being stuck in traffic. They would look up and see a colorful billboard advertisement. Alec asserted that there are over 1000 billboards in LA alone. Each of those billboards would be thrown away every 4 to 6 weeks.

Alec said that the billboard was made of a heavy duty, waterproof, and durable vinyl material. He insisted that it was the perfect material for making a bad, but it was very bad for our landfills. That’s where he got the idea for RareForm. Before the material could reach the landfill, they would intercept it. They would then cut it up, so it, and turn it into one-of-a-kind accessories. They are able to get 1000 wallets, 10 both surfboard bags, were 100 unique backpacks out of one billboard. They create attractive one-of-a-kind products that help sustain the environment.

Aric excitedly told the Sharks that they were able to get a billboard from their favorite show, Shark Tank. Aric said that would love for the Sharks to check them out. The two brothers began to hand them out. They told Robert that they got him a surfboard bag., And the rest of them each received a bag as well. Alec explains that each billboard was almost as big as the room that they were in.

Mark wants to know how they ended up in billboard bag business. Alec let them know that he had moved to El Salvador after college. He had been working with the nonprofit there in a small fishing village. One of his work friends showed him a tote bag that was crafted out of billboard material and said that they also used it as roofing. Alec was immediately interested in the material, wanting to make a surfboard out of it. He took the material to a local business that made car upholstery, and they actually got the product into a retailer fairly quickly.

Barbara asked how many billboards they were obligated to buy through the contracts. Alec said that the billboards were actually free for them. He said that they gave the company’s an opportunity to save, and the company cross-promoted them to their advertising end.

Mark even want to know how much it costs to transport the billboards. Aric explained that they get about 1000 billboards, and it costs $200. Lori asked what the cost was on a knapsack, the wallet, or the surfboard bag. Aric explained that the surfboard bag was what they started with. It costs $12 to make, they wholesale that for $40, and retailed it for $80. Alec cut in and stated that the wallet was the most popular item. It cost them two dollars to make, and they will sell it for $12.50.

Mark even want to know how they communicate the message of their brand. He said that by just looking at the bags, you couldn’t tell that it was from a billboard. He told them that if you didn’t know it was a billboard, it might not feel right to you. Aric said that the biggest thing that their customers loved was the story behind the business. Barbara asked to was telling that story for them. Aric explains that they told it themselves on their website, but in stores, they had to get the best displays possible in order to help tell the story.

Mark pointed out that there is no display like that on the stage, and want to know what they would do. Alec pointed out the wallet display that they used in every Quicksilver store. It had the wallets displayed in the front, while the explanation of them was in the back. Alec said that the display helps them turn product very fast.

Their cost ended up going way down, from $28-$12 on the surf bag alone. Mark pointed out that they should’ve made money last month after the difference. Alec said that they made about $500,000 in profit the last month. Robert asked them where they got the money to absorb the loss. The brothers explained that they each put in money. Alec put in $60,000 and Aric put in $20,000. Next, they’ve raised $200,000 prior to revenue. The money was raised from family and friends. Those investors got 30% equity in the company.

Aric explained that the two brothers own 40% of the company at the moment. Alec explained that they also raised another round on RareForm, at a 2.5 million-dollar valuation. Mark seems surprised that it was that high on this type of business. Kevin pointed out that the repair was asking for a $300,000 investment on a 10% equity stake. That implied a value of $3 million. Kevin said that there is no chance in hell that RareForm was worth $3 million.

Alec said that another part of their business was their corporate side. They just got a purchase order from what one of the largest theme parks in the world. Barbara cut in, stating that they did not have enough stock for her. She said that at this point, they just keep selling off chunks of their business. It concerned her, and it didn’t seem to her that there was enough left for someone else to come and take a bite. She went out.

Mark said that it was their own personal touch and creativity that has a lot to do with why it is successful. They were not coming in and asking for $100,000 in exchange for 30% of their business. He said that they were asking for an evaluation of a real company. That would need to grow significantly in profits in order for him to get his money back. He was out for those reasons.

Lori told the entrepreneurs that they’ve done an amazing job scaling the business up to $1.1 million in sales. She also loves the environmental impact of them recycling the billboards. She, however, saw the uniqueness of each bag and wallet as a negative. They were never going to have the same two twice. She said that it was a bad thing because if she saw one that she loves another person, she couldn’t get the exact one that she wanted. She went out.

Robert said that he liked the idea, but he would only invest if part of the deal was to get some kind of license or contract with business advertising on the Billboard. He said that it wasn’t worth the three-million-dollar valuation they were placing on it when they didn’t have that system in place. He went out as well.

Kevin said that left only him. This was a position that he liked to find himself in as it gave him more power. He saw the biggest problem with their deal as the valuation and the fact that they didn’t own that much equity anymore. They weren’t worth $3 million. He said that there is only one way that he would do a deal. He offered them $300,000 as debt at an 8% interest rate to be paid back in 36 months. That gave them three years to prove the model. Kevin wanted 10% equity which he offered when they walked in the Tank. He made it clear that he wasn’t willing to compromise on it.

Kevin told them to make a decision right now. The two brothers looked at each other, looking concerned. Kevin pointed out that that was their only offer. Barbara pointed out that they are very quick to give away stock which was scary. Kevin told them that if he was going to do was straight equity deal, he would ask for 40% of their company. He said that if they did that deal, they would not own enough to get out of bed in the morning.

Robert asked them how much they need the cash today. Alec said that they were in a place where they need the cash. Robert told them if they need the cash than they should take it. He pointed out that wasn’t a balloon payment, they would be paying it off along the way. Kevin said that he wasn’t going to do something that hurts the business he was trying to support. Barbara said that she thought he was being overpaid, probably just to be a devil’s advocate.

Alec said that 8% interest was a little high, and he asked Kevin if he would go down to five them. Kevin scoffed at that and asked if they had factored any of their receivables so far. Alec said that they were getting them for 6%. Kevin told them that he thought he was lying and decided not to back down. He said that he didn’t have to say it, but he was extremely valuable. The two brothers looked at each other, and Alec said that they would be willing to do the deal. Barbara said that they made a mistake, and they would have to look at Kevin’s beautiful face every day. Let’s see how they did with that deal.

RareForm in 2018 – After Shark Tank Update 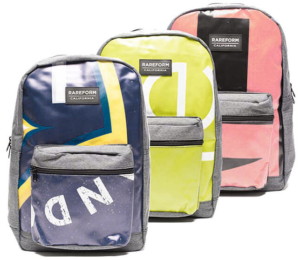 Since appearing on shark tank, RareForm has teamed up with some artists repurposed one-of-a-kind billboards with them. Over the 2017 holiday season, they were featured in several gift guides. According to their Twitter account, they are currently selling off old patterns in their warehouse sale. Click here to get a product at a lower price. According to an article on Forbes website, they have almost tripled’s their sales since their segment aired. That has allowed them to recycle as much as 50,000 pounds of the billboard vinyl. They have also gotten a partnership offer from Disney, who was interested in getting rid of their billboards in this creative way.