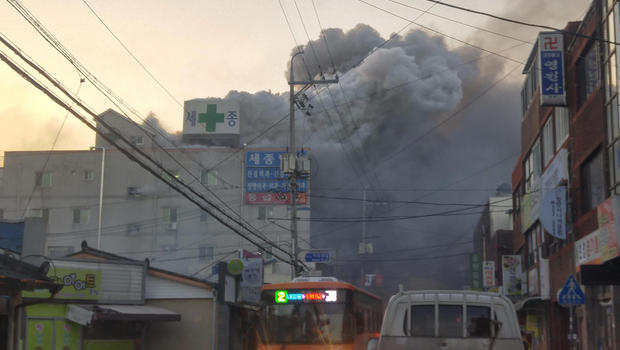 A fire at a hospital in the city of Miryang has killed at least 37 people and injured 70. The fire, which happened at Sejong Hospital, is said to have started in the emergency room area.

Emergency services at the scene said most of the victims appeared to have died from smoke inhalation. They have also confirmed that hospital staff, including a doctor and nurse, are among the victims.

The hospital and nursing home next to it had about 200 patients at the time of the fire. Emergency services have revealed that some of the injured are in critical condition. Police first said that 41 people had lost their lives but emergency services later said it was 37.

One survivor told local media that he was on the second floor when he heard nurses scream that there was a fire. He says he went to the exit door but the stairway was filled with smoke. He then went to a window and escaped down a ladder that the firefighters had placed.

The cause of the fire is not yet known but some have said that it started in the emergency room. Local media reports that the building did not have fire sprinklers. Several officials have called for an investigation and are traveling to the city.

The hospital fire comes less than two months after a fire at a public gym and sauna left 29 people dead and many others injured. The fire, which happened at a building in the city of Jecheon, started in the basement and quickly spread to nearby floors. Officials say that most of the people died in the second floor. According to a spokesman for the emergency services, the fire sent out so much smoke that many people didn’t have enough time to escape. 20 people were rescued from the rooftop and several were transported to nearby hospitals, where they were treated for smoke inhalation.