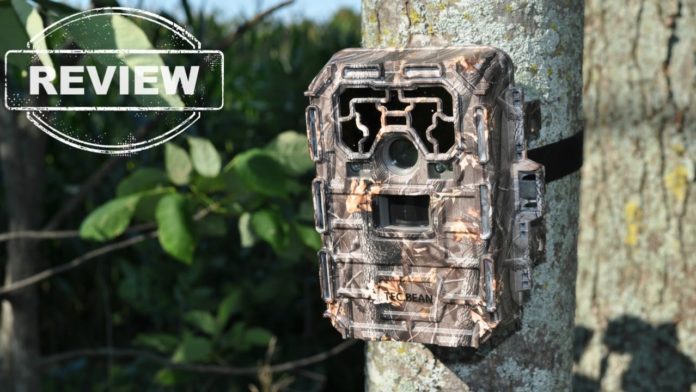 If you’ve hung around this website and seen enough of my writing, you may notice several trends. The first is that I love tech, then that I have some knowledge of guns, and lastly, I’m big on nature. This, of course, includes hunting, and since moving back to the Pacific Northwest from Florida, my strategy has had to change a bit. While I have spent years now doing stalking hunts, in the mountains and forests of Washington, it can be a little bit of a hassle trekking for Elk, especially if I’m on a limited timetable. As a result, I decided that scouting areas with cameras and then picking a Blind spot would be in my best interest. Luckily, this meant I could finally take a look at the TEC.BEAN Trail Camera and put it through its paces. How did it work out? Let’s take a look.

So what is the TEC.BEAN anyways? Well, like many trail cameras it is supposed to be an ultra-efficient, medium range camera that activates and shoots either pictures or video whenever there is something in proximity to it (which also makes it a potential security option as we will see later). As a result of this required function, several features are required: High resolution, a quick auto timer, and preferably night vision.

The TEC.BEAN Camera has a 12 MP resolution which translates to full 1080p quality when viewing it on a computer screen, and has an effective range of around 75 feet both during the day and night, with 36pcs IR LEDs which can ensure that you can capture wildlife footage even in the dead of night, and make them none the wiser as there is no visible light. Especially useful for my review session, this camera is extremely waterproof and also features password protection so no one else can use your footage to poach your hunt.

Other information it can give you is a GPS Geotag (great for finding sweet spots), a timer, replay, interval recording, and pressure as well as temperature data for the region being recorded. In terms of auto-capturing, the camera claims to be activated within 0.6 to 0.8 seconds. Does this mean that all these features will be handy, or be too little too late in the field test?

TEC.BEAN in the Field

Given the recent weather of rain and around 20F degrees during the night, I figured there was no better time to go out into the field to test how much environmental conditions affect the camera, despite Elk (my preferred prey up here) being out of season. Around midday, I decided to trek out about 2 miles into the Pine forests nearby, and set up the encased camera, with video length set at 10 seconds ( a good mix of length for identity but short enough to not waste battery). I then found an appropriate tree branch base to wrap the accompanying band around.

I will admit I was a little nervous as this isn’t the most sturdy rig I’ve ever set up, but it did hold through the night so I shouldn’t complain too much. In trying to angle the camera, I found some room for improvement. Though it is in theory easy enough to determine what the angle and such would be, having an App to connect a smartphone screen via Bluetooth to the camera to determine it would be amazing, and probably not too intensive. Otherwise, the current guess and check method is fine enough. With setup complete, I trudged back out and waited for the next day. When I came back, I noticed a few things that appear to be mostly bad luck. First of all, I forgot some basic science. As one might imagine, fog can be quite bad for a standard camera during the day, and severely limit your view. It gets even worse when you are to depend on IR to get an image and you’re met with pea soup that even the Exorcist movies would shy away from. On the plus side, this camera is sensitive. It (from my gathering) appears to have detected a squirrel right on the edge of it’s 60 degree view and switched on for 10 seconds, which I would save lends it a great deal of points in the sensitivity department.

For the second night, which proved to be much less foggy, I decided to test out the still camera function to see if I could get a decent shot of anything in the woods. Again, this is where there was some good and some bad. The bad in this case was the manual. I, like so many Americans, do not read manuals. However, if all other resources fail, I do, and all I have to say is that I am glad it was both in English and Russian, as I could barely make heads or tails of what was stated in English, but the Russian was somewhat better and gave me enough clues to get the camera working how I’d like. The good is that when I did get it working, it worked like a charm. With significantly less fog, the photos of the night were pretty great, including one of an 8 point elk just on the fog border that the camera still managed to pick up, and some decent debris movement on the wet forest floor. Had this been during hunting season I am sure I would be over the moon; but as of now, I can still be satisfied with a job well done from this camera. 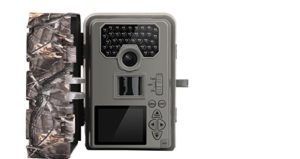 Overall, this camera is pretty great for the price of around $100. There are certainly areas to improve, including both manual writing and the camera adjustment process, but the pros far outweigh the cons. The wide viewing angle affords hunters a decent view of the territory, and the camera is small and low profile enough to not draw too much attention, which is great. Obviously, the waterproofing worked great in my environment, and even in cold temperatures, the camera functioned wonderfully.

In regards to battery life, this camera is nothing short of incredible. Despite being out 2 days on 8 rechargeable batteries, recharging the batteries was next to useless; all of them were back to 100% in less than a couple of minutes. While longer testing would be needed to see if it could last the advertised 8 months, at time of writing I wouldn’t doubt it. Now, regarding this as a security device. This camera could be pretty handy for that purpose if you can place it in a discreet location as its small size and great sensitivity can be a huge asset. In theory (though I do not have the capabilities to test this) you could even have a connection running from your PC to the Camera and have a live security feed, or jerry-rig something to bounce the data from a modem to your PC, which would make for a great hacking and security project.

That being said there are some features like Multishot which I would not use for this purpose, as it could blur key features for the sake of capturing movement. Instead, using the hybrid video/photo setting may be more advantageous. I would recommend if you use this for longer periods either for hunting or security, to invest in an SD card. Otherwise, it can be a little hard to determine what to delete on the otherwise adequate 2 inch display on the camera itself. In terms of a rating, I would give this TEC.BEAN camera a solid 8.5 out of 10 and recommend it for most hunters who may be looking for a new spot, or people looking to secure their property a bit better.

If you want to automatically take advantage of all the current discounts at Amazon.com Click Here.