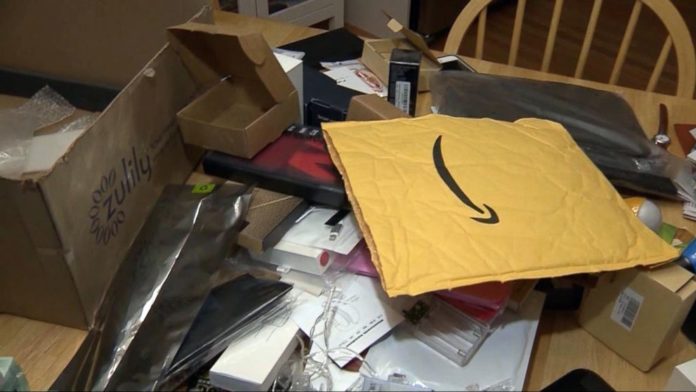 A Massachusetts couple that has received several packages from Amazon is confused about the mysterious deliveries but experts have an idea on what may be happening.

Mike and Kelly Gallivan have received over 20 packages from the online retailer in the last four months. The couple has not ordered any of them and actually wants them to stop. The first delivery happened back in October but they would continue the following weeks.

Mike and Kelly were told by Amazon in one of the calls that they could not trace the packages because they had been purchased with gift cards. The packages don’t have much information either. The only address found on the boxes is from Amazon’s distribution center in Lexington, Kentucky.

The couple did confirm that in the past, they had ordered some tech items from China. They believe someone made a profile with their name and address. The couple says the items they have received in the four months appear to be from China.

Amazon has not been able to trace or stop the packages from being delivered to their home. But the online retailer has confirmed that it has launched an investigation. The mystery has not been solved but experts have an idea on what may be happening.

Some believe the deliveries are part of a scam known as brushing. The practice involves vendors paying someone to use gift cards to purchase items through the website. The items are then sent to a real address. After it is delivered, the vendor or people involved in the practice write good reviews on the product.

Analyst Brian Kilcourse says that the plan is to get a good review on the product. He adds that the more positive reviews you get, the more likely you’re going to get sales from it.

In the past, Amazon has made changes on the reviews and taken action against sellers buying fake reviews. In October 2016, the company sued three sellers and a few months before that, it sued sellers using fake accounts to leave positive reviews on their own products. The first lawsuit in June 2016 was against more than 1,000 people.