Before the BootyQueen Apparel line was born, Amanda Kuclo was the original booty queen. She excelled in fitness, winning over 25 competitions. According to the website, she and her husband Steve built up her brand on social media and made her famous for her butt selfies. She and Steve asked her following if they would be interested in her fitness line, and they got an overwhelmingly positive response. They did a presale and sold out fairly quickly. Let’s see if the Sharks would get as excited about BootyQueen Apparel. 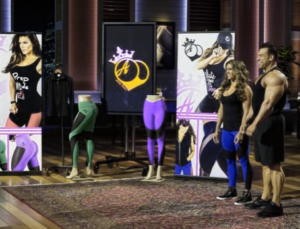 Amanda and Steve Kuclo walked out onto the stage and into the Shark Tank, holding hands. Steve was a tall bodybuilder type who had bicep muscles the size of Amanda’s head. The pair introduced themselves and told the Sharks that their business was named Booty Queen Apparel. They requested $250,000 in exchange for a 20% equity stake in their company.

Amanda began the presentation by telling the Sharks that butts were back. Daymond raised his eyes to the ceiling, looking prayerful. She claimed that women were using weights with the hope of creating a better backside. Steve spoke up, claiming that the company was inspired by his wife’s success in the fitness industry. Amanda was once featured in the magazine Muscles and Fitness for Her, and her booty workout snagged the cover story. As Amanda turned around to show the Sharks her assets, Steve said that she was well known for her glutes, her amazing personality, and her signature pose. Daymond nodded in appreciation. Robert admonished him to stop gawking – after all, her husband was right there.

Daymond did not look deterred. It didn’t look like the attention bothered the couple. Amanda said that they were in the Tank to introduce their line of high-quality, comfortable fitness clothing. It is a fashion fitness line that would focus on the booty. She said that BootyQueen Apparel catered to the woman who loves strengthening her body, and looking great while doing it. They ended the presentation by asking the Sharks who wanted to add their “assets” to theirs.

Lori told Steve that she thought he might be the biggest man that has ever come to Shark Tank. Steve said that he saw that as a good thing. Mark said that he had shown her the “gun show,” flexing his muscles. Lori laughed out loud. I guess it wasn’t too impressive. While the Sharks were engaging in some wordplay, Amanda had started to pass out the samples the couple had brought. She handed Lori a black and pink mesh outfit, and Mr. Wonderful got a green pair of leggings – the color of money, of course.

Robert stretched the pair that he was given, and said that it was a heavy fabric. He mentioned that he thought the purpose of working out was to get your booty smaller. Both Amanda and Steve told him that he was wrong. Robert said that he did not get it. Kevin said that they got a lot of clothing in the Shark Tank that featured “hiney-compression technology.” He wondered if BootyQueen Apparel had the same thing, or if there was padding for the booty. Amanda said that their clothing line was very different. Lori asked if it would actually enhance the bottom at all.

Amanda said that it didn’t lift it – her butt was just that awesome. It left room for the butt to be seen. She laughingly asked if they didn’t hear the part of the pitch where her husband said that she was known for her glutes. She gestured towards the marketing for BootyQueen Apparel and stated that it was all her. She said that both she and Steve were both champions – she had won 26 competitions in fitness, and Steve had won an impressive amount as well.

Lori asked if she won for her glutes, or if it was everything. Amanda explained that she was very active on social media. When she went to the gym, she would take butt-centric selfies, and post them to Instagram. They would be tagged #BootyQueen. She said that women started calling her Booty Queen, and then her brand was born.

Mark asked her how many Instagram followers she had, and Amanda explained that she had 700,000 followers on Instagram and close to a million on other platforms. Robert asked what the leggings were supposed to do, and Amanda explained that it was literally an apparel line that was based on their following. Robert asked her if there was anything special about the garment itself. Amanda said that there was nothing special except the following that they had built around it. Amanda said that women would wait for her in long lines to tell her how much she had changed their lives. Lori smiled at that.

Robert asked if they were really building the brand, and Amanda said that that was it. Lori said that the way that the lines were cut made it look like it lifted the butt a bit. Steve said that many customers say that. He worked on the back end of the business. Amanda explained that that meant that he is the email server. Steve stated that he got many emails stating that their butt has never looked so good. Amanda said that the material did help shape women’s bodies.

Kevin told her that the entire concept was just pure branding. He told her that there was nothing unique about the product other than it is stylish. Robert chimed in, saying that he could buy something similar anywhere. Amanda urged them not to think of apparel in general, but rather “all things booty.” Lori said that the statement was great, and asked her if she had trademarked it. When Amanda said that she had not, Lori told her that she should do that immediately, Mark asked her if she had done any trademarks at all yet. Steve told him that their logo was being trademarked.

Robert asked if they had sales, and Steve said that they’ve done $375,000 in about 18 months. Daymond asked how much it cost to make the pair of pants that Amanda was wearing. Amanda told him that they cost $33 to make and $85 to sell. Daymond asked where they sold their product, and Amanda informed him that it was online only.

Mark said that he was in agreement with Kevin. Apparel was not his core competency. He went out as well. Robert was up not, saying that he didn’t really get it. The whole big booty thing was not really for him. Amanda cut in, saying that it wasn’t just about big booty. She said that it was also about empowering women. Lori attempted to correct her, saying that big booties were her brand. Amanda agreed.

Lori said that Amanda was adorable, and she had a great personality. Everything about BootyQueen Apparel was on trend and on brand. She told Amanda that she should take all her cleverness to really work on building a brand around the booty because that was what made her unique. She said it set them apart from everyone else who was doing leggings. She suggested that they should do a line of equipment as well, but Lori would not be the person to help them. She went out.

Robert spoke up again. He said that he had been in the space, and tried to work with his businesses to create a brand. He called it brutally difficult. He said that they weren’t in the clothing business as much as they were selling Amanda herself. That wasn’t for Robert. He went out. Daymond was the last SHark standing. Amanda appealed to him, stating that he could help take their ideas and implement them. She said that she could post one video of herself wearing leggings, and she just sold an outfit, a training program, and a piece of equipment from one website. Steve called her an influencer. Daymond appeared to consider.

Daymond said that there were already a million pairs of tights on the market. The only way they could hope to stand out from the rest is to get a loyal group of return buyers who all see her as an influencer, and they keep buying the products. Steve said that they get a lot of repeat buyers. Amanda agreed, stating that they had run the product by their fans before ever launching, and they did a presale. They didn’t have to take money out of their own pockets because they ended up selling out of the presale – twice.

Daymond said that he would normally protest, saying that they didn’t have the distribution channels set up. However, he did a deal with a similar brand last year, and they were already up to 5 million in sales. Daymond asked what they wanted the money for. They told him that they wanted to increase inventory, and hire an employee. Daymond offered them $250,000 for 1/3 of the business. The entrepreneurs discussed it amongst themselves. Amanda asked him if he could do 25%. Daymond considered, and said that he couldn’t. Amanda tried again with 27.5%.Daymond winced and said that he liked that she was going up. Daymond said he was thinking more like 50% originally, but he was willing to go to 1/3.

Daymond said that he wanted to be equal partners on the entire brand.Robert asked them what they were thinking. There was a long moment of silence before Steve agreed. All three of them hugged it out. The other Sharks requested that Steve pick Daymond up, and he happily obliged. In their interview after the tank, Amanda said that they had come into the Tank wanting to make a deal with Daymond. Steve said that he was the strategic partner that could take them to the next level.

BootyQueen Apparel in 2018 – The After Shark Tank Update 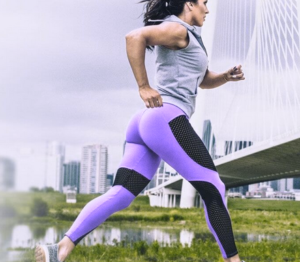 After the entrepreneurs behind BootyQueen Apparel accepted Daymond John’s offer to be an equal partner, they have been super busy. Amanda appeared on Lifetime’s Little Women: Dallas in order to dress one of the cast for a bodybuilding competition. According to an article on 2paragraphs, they also released a limited edition legging called Ideal. There is a BootyQueen rewards program where you can earn points for joining, or following them on social media. The points all add up to a gift card. Find out more by clicking here.