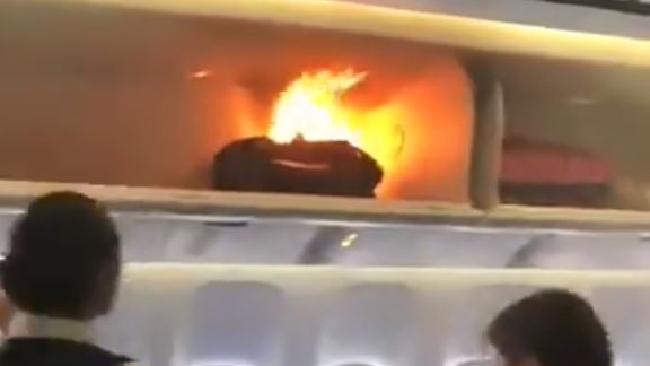 Passengers on a China Southern Airlines flight had to wait three hours in the airport after a bag that was placed in one of the compartments caught on fire. Passengers were boarding the plane at the time of the incident, which only lasted a few seconds.

The plane was evacuated right after the fire and the flight was delayed for three hours. Reports revealed that authorities questioned the owner of the hand luggage. The South China Morning Post reported that no one had been injured during the incident, which took place when passengers were boarding a plane that was headed to Shanghai.

The airline released a statement on Weibo shortly after the video surfaced. In the statement, they said staff reacted quickly and accordingly. The airline did not give any details on the incident.

It is not the first time in recent months that a fire is started inside the plane by a phone accessory or phone. Back in October, a smartphone caught fire during a Jet Airways flight to the city of Indore. The smartphone was sitting in a handbag under the passengers seat. The fire started just minutes into the flight and the crew had a difficult time putting it out as the owner of the phone said the fire extinguishers did not work.

The woman was carrying three phones in her handbag, including a Samsung J7, which was said to be the one that caught on fire. The airline said the incident was resolved as per guidelines but the woman said she would complain about it since the fire extinguishers did not work. The phone was placed in a tray of water during the incident.