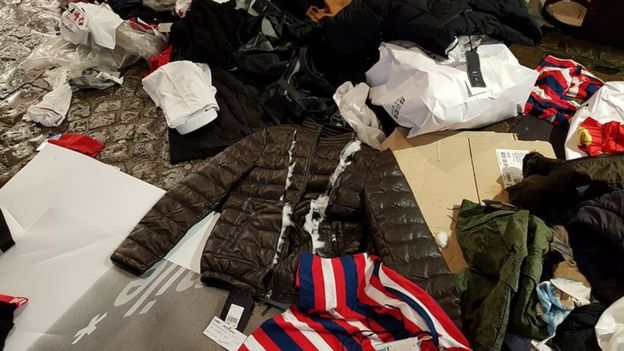 A clothing retailer in France is under fire after ripping and throwing out unsold clothes outside of their store. People criticizing the company say they could have given the unsold clothes to those who need them.

The post, in which she explains that she finds it disappointing that the employees threw away the clothes when there is people that need them, has over 1,000 replies and 20,000 shares. Users have seen the images and taken their criticism to social media sites such as Twitter. Nathalie is one of many who have shared images of unsold clothes sitting outside stores or in dumpsters in recent years.

The criticism against Celio, the store seen in Nathalie’s images, has led to the company releasing a response on Twitter. In the post, the company defends what it has done, explaining that the clothes were unusable because they had tears and holes. The company adds that their policy is to destroy the unusable clothes.

Employees at the store told local media that the clothes had water damage, which meant that they could not be sold or donated. The company has also said it works with a charity and usually donates discontinued stock.

According to recent estimates, more than 80 billion clothing items are made and sold around the world. That means billions of used or unsold clothes are thrown away. Celio has said that the clothes were unusable but the images continue to draw criticism as the weather is currently very cold in the country. Nathalie also mentioned in her post that there are homeless people sleeping near the store.