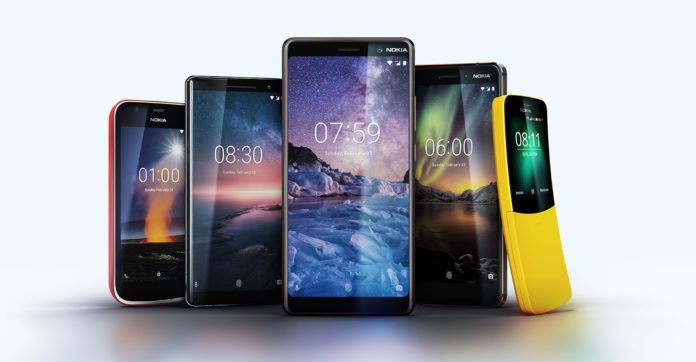 HMD Global, the company behind the Nokia phones, has announced not one, not two, not three, not four but five new phones. The company didn’t waste any time as the announcements came during the first day of MWC.

The five new phones are the Nokia 7 Plus, Nokia 8 Sirocco, Nokia 6, Nokia 1 and Nokia 8110. Four of the five are smartphones while the fifth is a nice little surprise for those who know about old phones. The Nokia 8110, first released in 1996, returns with a fresh new look to give customers a change from the smartphones we have today. The mobile phone, also known as the banana phone, was featured in the film The Matrix.

Here is a little more information on the phones that Nokia has announced:

The Nokia 1 offers the lowest price of the four smartphones announced. The phone has Android Oreo (Go Edition), which is a version of Google’s OS designed for budget-friendly smartphones. Specs: 4.5-inch display, 2MP front camera, 5MP rear camera, 1GB of RAM and 8GB of storage.

The Nokia 6 is an upgraded version of last year’s release. The smartphone was first announced back in January but was only available in China. The new Nokia 6 is powered by a Snapdragon 630 processor and there are variants with 3GB/4GB of RAM and 32GB/64GB of storage.

The Nokia 7 Plus is a mid-range device that brings a lot of the features found on a premium phone. The device has the same camera system as the much pricier Nokia 8 Sirocco. The phone does not have the glass material like the new Nokia 8 but it does have an elegant look with the gold accents on the camera, fingerprint sensor and buttons.

The Nokia 8 Sirocco is an upgraded variant that comes with a number of solid improvements. First, the device is nearly all glass, 95 percent to be exact. The other five percent is taken by the steel frame that is found on the sides. The second improvement is the curved OLED 2K 5.5-inch display. There is also a much larger 3,260mAh battery and wireless charging support.

The Nokia 8 and Nokia 8 Sirocco do have a few similarities, including the same Snapdragon 835 processor and 6GB of RAM along with the same 128GB of storage.

Nokia has done it again this year, announcing a remake of a classic phone. This time it’s the Nokia 8110. The phone has a new look with a different screen and keyboard. The company did not reveal a release date but it is expected to hit store shelves with a price of 79 euros ($97).