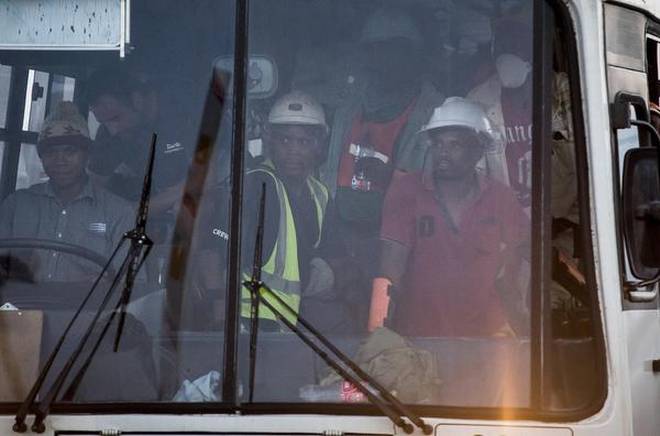 The 955 miners that were trapped at a gold mine in South Africa have been brought back to surface. The miners were trapped for nearly two days after power went down at the gold mine. The area has power generators but they couldn’t restore power after it went down.

A spokesman for the company operating the mine said that everybody is out. He added that there were cases of high blood pressure and dehydration but nothing serious. The workers were trapped on Wednesday night and had to wait until power was restored.

The local community and other workers were in the area to wait for more information. They also kept a vigil near the mine. The 955 workers were brought back to the surface on Friday morning. Pictures of the rescued workers sitting in a bus show them waving and giving a thumbs up.

Authorities believe the miners got trapped when a storm knocked down a power tower, leaving the gold mine and surrounding areas without electricity. No electricity meant that the workers couldn’t use the elevator. On Friday morning, power was restored and the elevator began bringing the workers back to surface.

The workers were trapped at the Beatrix gold mine, which is owned by Sibanye-Stillwater. The mining company is the largest individual producer of gold in South Africa and one of the largest in the world. A spokesman for the company confirmed yesterday that the workers were safe and were being sent food and water. The spokesman added that they had generators in the area and were trying to link them up.

South Africa is the fifth largest gold producer in the world, according to recent figures. But mine safety has always been a major concern in the country. The National Union of Mineworkers released a statement saying that companies like Sibanye-Stillwater which should be industry leaders in creating a safety culture are not doing enough to prevent accidents.

In February 2016, a collapse at the Lily Mine left 75 workers injured and three trapped. Rescue operations were launched shortly after but they were suspended after the mine was declared unsafe. The bodies have not been recovered and one official said last year that current conditions are too risky. In August 2017, five miners lost their lives when part of a gold mine collapsed. Mine deaths reached a record low in 2016 but 2017 saw an increase, with 76 total deaths.