Study Reveals The Least Corrupt Countries In The World 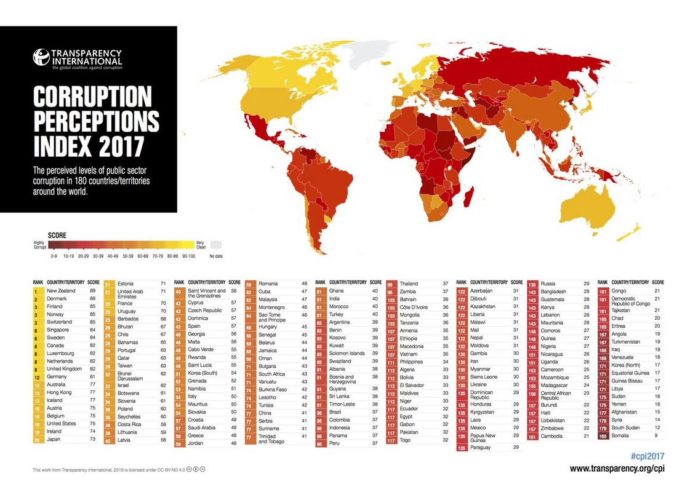 The Transparency International Corruptions Index, released on February 21, has revealed the least corrupt countries in the world, with many of the top nations seeing small drops from the previous year.

The Corruption Perceptions Index 2017 measures the public sector corruption levels around the world. The countries are rated from 0 to 100, with the higher number meaning less corruption. The study, released on Wednesday, includes 180 countries.

Third place is shared by three countries, Finland, Norway and Switzerland. The three have an 85 score. Finland saw the biggest drop of the three, going from 89 score in 2016 to 85 in 2017. The score remained the same as last year for Norway but it is a three point drop compared to 2015. Switzerland saw a one point drop after receiving a score of 86 in 2016, 2015 and 2014.

Singapore and Sweden share sixth place, with an 84 score. The score remained the same as last year for Singapore while the 2017 score was a four point drop from the year before. Canada, UK, Luxembourg and Netherlands are tied for eighth place with an 82 score. Canada kept the same score as last year while Luxembourg gained one and Netherlands dropped one. The UK also gained a point after seeing the same score in 2016 and 2015.

Germany is ranked 12 with an 81 score, the same as 2016 and 2015. Australia, Hong Kong and Iceland all had 77 points. Australia saw the biggest drop out of the three, with a two point drop from 2016. Austria, United States and Belgium have 75 points. The US gained one point while Austria’s score remained the same and Belgium’s dropped two.

The last two countries in the top 20 are Ireland and Japan, with a score of 74 and 73. The two gained one point compared to 2016. Western Europe had the best average of the regions with a score of 66.

Somalia had the worst score of the 180 countries, with just nine points. South Sudan, Syria, Afghanistan and Yemen finished in the bottom five. Syria, which is currently in an armed conflict that began back in 2011, has seen the third biggest drop since 2012. During those five years, the country has dropped twelve points. St. Lucia has dropped 16 points while Bahrain has dropped 15 in the last five years.