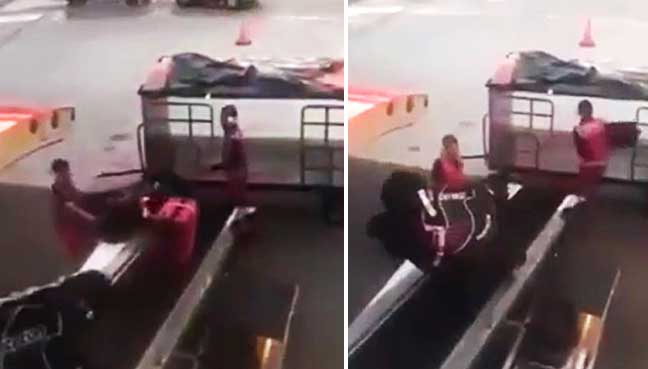 Malaysian airline AirAsia apologized earlier today after two ground workers were seen throwing baggage. The video, which went viral shortly after it surfaced, was posted by Facebook user Fen Lim. The video appears to have been filmed from inside the plane and the user also posted a photo of the damage left to a bicycle, which was in the baggage.

The video posted on Facebook was shared thousands of times. Ms. Lim was not happy with the incident, writing on social media that the airline broke her bike. She also mentions that it was filmed while they were still seated in their flight. In the video, two ground workers are seen unloading baggage. One of the workers tosses the baggage that appears to contain the bikes. The second worker tosses the other baggage in the cart.

The video was posted on Wednesday and it didn’t take long for the airline to respond. AirAsia CEO Riad Asmat said on Thursday that he is a cyclist and was pretty disturbed when he saw the actions of their staff. The CEO also said that they will be taking action and that the airline will waive all fees of bike transport during the month of April. He finished by saying that he hopes they will continue to improve themselves and that attention has been put into this example.

Mr. Riad was not the only one to respond to the video from Ms. Lim. AirAsia Group CEO Tony Fernandez said on Facebook that the ground handling company seen in the video is a joint venture called GTR. He added that they do take full responsibility and that after meeting all his ramp boys and girls, he is really disappointed. Ms. Lim later posted on Facebook, thanking the CEO for acknowledging and taking actions.

It is not the first time that the airline is in the news over this problem. Last month, a video that showed Mr. Fernandes speaking to his staff went viral. In the video, the AirAsia Group CEO is seen talking to his staff on how they should handle luggage. At one point, he asks staff to please look after bags better. He also mentions that every day, he gets someone e-mailing him about bags.

AirAsia, founded in 1993, is a low-cost airline that flies to more than 165 destinations in 25 countries.