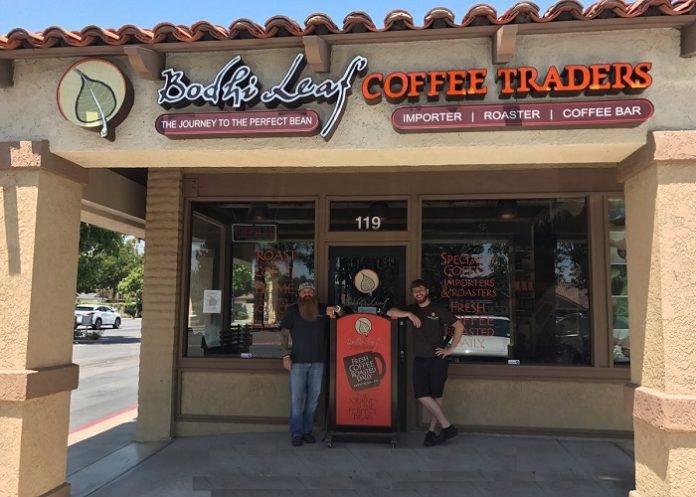 Steve Sims launched the Bodhi Leaf Coffee Traders company in 2009. Steve had been in real-estate for several years beforehand, but when the market collapsed, he took a big risk and invested his last $60,000 in importing coffee in bulk, and the gamble paid off.

Steve had managed to grow a multi-million dollar wholesale business with over $6 million in revenue annually, and in addition, he had a highly respected retail outlet in Orange County, California, but he lacked the confidence to grow the company any further, despite knowing that he was on to a winner.

Marcus visits the Bodhi Leaf retail outlet in Orange County, and he’s instantly impressed with the charm of the place, but that’s nothing compared to how impressed he is with the quality of the coffee. ‘It’s the best cup of coffee I’ve ever tasted’ he enthuses, and you can almost see the caffeine making his synapses sizzle as he describes the Bodhi Leaf store as the ‘Mecca epicenter of coffee’.

Marcus likes Steve Sims too, and he loves his impressive bushy beard. Steve is a modest entrepreneur with plenty of humility, but Marcus quickly detects he also lacks confidence in running his business. Steve’s grasp on the coffee industry is superb, he’s importing high-quality coffee directly from farmers, selling tons of it wholesale, roasting it for other retailers, and he’s also supplying it directly from his retail stores, the second of which is in Anaheim Hills. Steve’s team is knowledgeable, loyal and they work well together, but there is a fly in the ointment.

Steve employs a sales manager, Jeff, who is responsible for wholesale contracts, which bring in over $5 million of the annual $6.6 million in sales, but Jeff is also keen on describing himself as the vice-president and a senior employee. Jeff even bosses the other employees about, and he’s creating tension in the business. When challenged about his behavior he denies ever telling anyone what to do, but store manager Brando quickly proves he’s either lying or forgetful, by producing shift-supervisor Dana, who confirms Jeff has been giving her orders to clean up.

Steve isn’t communicating well with his staff, there have been no staff meetings, and when Marcus gets them all together it quickly becomes clear that Jeff is at least partly responsible for the lack of an organized inventory. Steve already has investors who own 50% of the business, but profits are less than $100,000 a year, and he’s lacking a working capital to buy the following years harvest.

Marcus can see lots of potential in the business and thinks Steve’s humility is a big asset, as long as he can build his confidence. Marcus makes an offer of a $1.75 million investment, in exchange for 50% of the business, but Steve doesn’t want to be left sharing the other 50% with his investors. Eventually, they agree that Marcus and Steve will take a 40% stake each, with the other investors taking 20% between them.

With Bodhi Leaf Coffee Traders now able to purchase the following years harvest with Marcus’ investment, Marcus wants to look at expanding the company operations into a national business. He also thinks that the current branding, a leaf logo designed by Jeff, is not memorable enough, and he suggests that Steve’s beard becomes the new brand. Steve is uncomfortable with becoming the focus of the brand, viewing such a move as arrogant, but Marcus leaves the thought in his mind as he works on building Steve’s confidence.

Marcus proposes moving away from a retail presence in stores, as that is in direct competition with the lucrative wholesale contracts the company has with other coffee brands. He takes Steve to Chicago, where Marcus has found a huge distribution center that can produce 1 million pounds of roasted coffee a year, vastly increasing the current capacity of just 120,000 pounds, and paving the way for a big increase in the wholesale business nationally.

Marcus, Steve, and Jeff then pitch their product to Chicago’s Rockit Ranch Restaurant group, but Jeff’s sales technique doesn’t impress anyone. He completely fails to connect with the customer, and even though Steve makes a valiant effort to save the day, ultimately it’s Jeff’s lack of personality that has soured any potential deal, and even worse is the fact that Jeff thought the pitch had been ‘Ok’.

It later comes out that Jeff has been buying from a coffee farmer in El Salvador for many years, but since he’s begun dating the owner of the farm, the costs involved have risen sharply. Steve admits to Marcus that he’s almost fired Jeff several times recently over the problem, but eventually, after they discuss the situation between the three of them, Jeff tries to deflect Steve’s inquiries, Steve gets annoyed and eventually he fires Jeff, in a confrontation that leaves Marcus impressed at the amount of confidence he is now showing.

The warehouse in Orange County is given a brand-new computerized inventory system that allows the stock levels to be updated instantly, and Steve, who by now is holding regular staff meetings and displaying far more confidence than before, hires Rick, a new sales and inventory manager who seems to be far more committed to the business instantly than Jeff ever was.

The new distribution center in Chicago is completed, and Bodhi Leaf Coffee Traders is now in a position to expand easily, with everyone feeling far more confident now that all the old problems have been ironed out, but there’s still one more thing on Marcus’ mind, and he takes Steve and the team to Chicago for a walk with a surprise at the end. There’s a huge billboard advertising the launch of the Red Beard Coffee Traders company, and there’s also a retail outlet in the windy city to help boost the new brand’s profile. Marcus is unsure how modest Steve will react to the surprise, but when it’s up there in public view, Steve is pleasantly surprised and realizes there’s nothing arrogant about being the face of the company he’s built up from nothing.

As a final gesture to the loyalty of Steve’s team, Marcus gives them 10% of his stake in the company, as they are so committed to the success of the business, and he leaves them confident that the new Chicago wholesale operation can bring in $3 million in revenue annually, and with the $6 million in revenue from the California-based Bohdi Leaf brand, he expects total revenue for both brands to be eight figures within a year.

After some legal delays due to local regulations, the Chicago Red Beard retail location finally opened its doors in November 2017, and the Red Beard Coffee Traders brand now operates as a wholesale business throughout the mid-west, and online at the new website, ShopTheBeard.Com.

Both the Red Beard, and the Bodhi Leaf brands, run separate websites and social media pages, and Steve now takes a far more active role as the face of both brands. The Bodhi Leaf Website contains much of the same information as Red Beard, but the retail operation in California has now expanded to a third location in Placentia, California. The Yelp reviews for all three Bodhi stores are overwhelmingly positive, and there’s absolutely no hint of anything but completely satisfied customers when it comes to the coffee and service on offer.

Marcus and Steve plan to expand the retail side for the Red Beard brand in Chicago too, and in the next year or so they intend to open multiple locations in the city, although as of the present time, they are still confined to one location in the Wicker Park area.