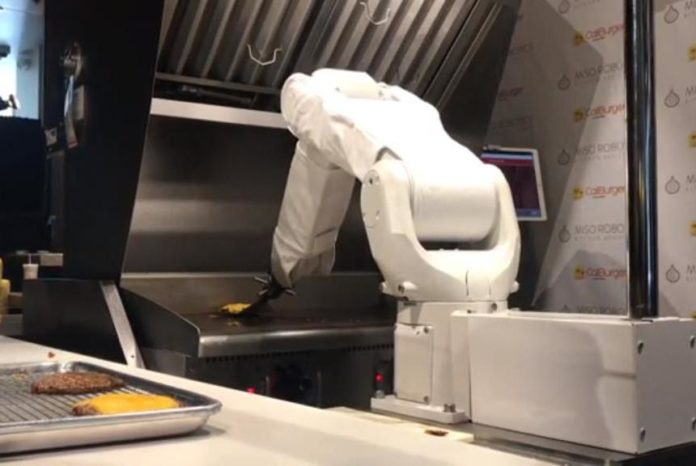 Flippy the burger flipping robot that recently debuted in a California restaurant is already on a break. The robot was doing all it could but the demand was so high that it made it seem like he was too slow.

Flippy the robot has a simple job, flip burgers in a grill but there is a lot of technology behind this. Flippy is equipped with heat-sensing and image-recognition tech to know which burgers need flipping. The robot can grill 150 burgers per hour.

The robot was installed at a CaliBurger restaurant in Pasadena and recently began working there. But things didn’t go perfectly during the first day and he has been taken offline so a few improvements can be made.

The robot will need to work faster but the restaurant is also making sure that employees know how to work with it. They are getting extra training so that everything is done as quickly as possible.

It has not been announced when the robot will be ready to work again but USA Today recently reported that it was still behind the grill but switched off. The robot can grill up to 150 burgers per hour but the news of its debut appear to have increased the orders, making it harder for it to keep up. Miso Robotics, the company that created the robot, said in a statement that it was testing the code that controls Flippy to make sure that it can cook at a faster pace during the busiest times.

CaliBurger employees in the location are also receiving extra training. In the training, they are being shown how to work with the robot so everything is done faster. This includes preparing the patties and the placement of the ingredients before Flippy receives them.

The robot is only at one location but the restaurant has bigger plans for the future. They plan on having robots in up to 50 locations. The restaurant decided to install a robot  because they say they spend a lot of money training people for this job. The big problem with that is that people often end up leaving the job after a short time. This forces the restaurant to hire and train another person.

Flippy is now taking a break after a day but the restaurant and company are now working to have it back soon. A return date has not been confirmed.

Apr 14, 2021
The PlayStation App recently got a redesign as part of the PlayStation 5 release. But there is more coming to the app, according to...