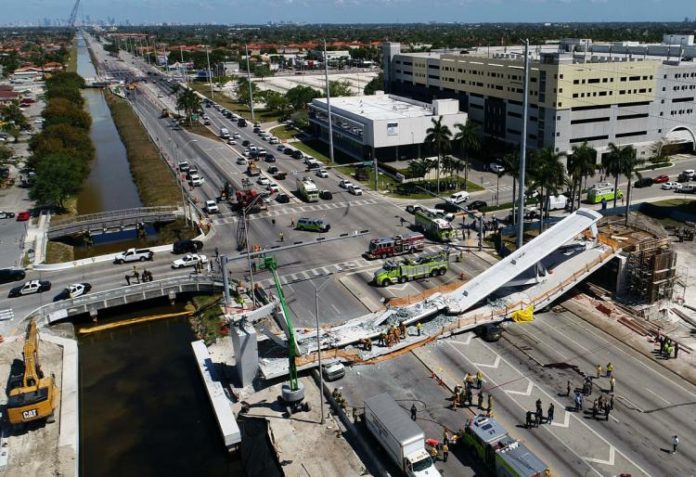 Authorities are still investigating the FIU bridge collapse but have confirmed that the death toll has climbed to six. Yesterday, authorities confirmed that one person was dead and that several others had been taken to a hospital.

Juan Perez, director of the Miami-Dade Police Department, said earlier today that their first priority is getting to those victims. The search operation continues as emergency workers are still working on removing the debris. Miami-Dade Fire Chief Dave Downey said on Friday that they have determined there is no longer any survivors.

The bridge collapsed yesterday before 2 p.m. and several cars were there when it happened. The bridge, which was being built to connect the city to FIU, fell across the road and cars that were there.

On March 10, FIU’s Twitter account posted a video of the bridge being moved into place. The university has now been updating on the situation through Twitter, where it recently posted a message from President Rosenberg regarding the collapse.

US Senator for Florida, Marco Rubio, recently said that the suspension cables on the bridge were being tightened when it collapsed. The bridge was moved into place on Saturday but had not been opened to pedestrians. The collapse happened during a red light. Rubio also said that there will be a full investigation, adding that the victims and their families deserve to know what went wrong. The $14 million bridge was constructed at a different location and moved there in one piece. Construction of the bridge was scheduled to be completed in early 2019.

Videos and images taken after the collapse showed emergency walking around the structure looking for survivors. At least two vehicles are seen partially stuck under the bridge. Several other cars were completely covered by the structure.

The bridge was being built to provide people a safe way of crossing the busy street. In recent years, students had spoken to local media about their concern when crossing. In August 2017, Miami Herald reported that a student was killed when she was hit by a car as she crossed the road.