Instant Pot vs Breville – Pro’s & Con’s of Both 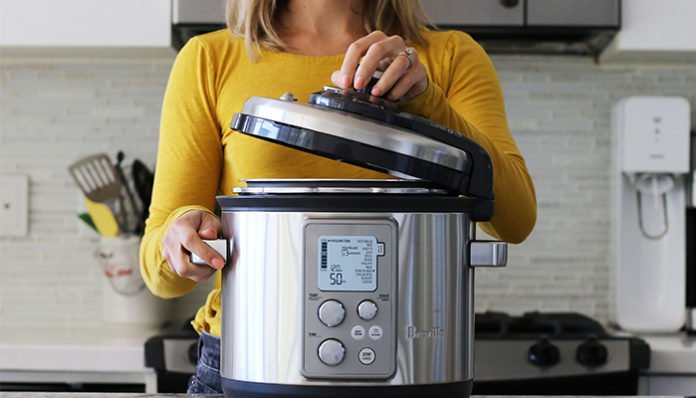 If you’re involved with cooking, then you’ve probably heard of the Instant Pot. A 7-in-1, it combines various kitchen appliances (e.g. yogurt maker, steamer, rice cooker, pressure cooker, slow cooker, food warmer, saute) into one for utmost convenience. Easy to use, it’s the perfect the appliance for those who are looking for an easy way of preparing meals, either for themselves or others.

Safe and easy to use, the popularity of the Instant Pot has soared over the past couple of years. In fact, many home cooks have chosen to replace their individual appliances with the 7-in-1. If you’re interested in preparing healthy, easy-to-make meals, the Instant Pot is definitely worth thinking about.

What Are Some Pros of the Instant Pot?

Why is it that the Instant Pot is so popular in the recent years? The answer is simple- it’s capable of performing multiple functions. Incredibly versatile, the cooker can be used to prepare a range of foods, with the press of a button. Another big advantage is the ability to use it as a pressure cooker- with how busy we all are nowadays, being able to cook a quick meal can be a god send.

Compared to some some appliances, the Instant Pot has also gone through vigorous safety testing, so you can feel comfortable using it, even when you’re out of the house.

Depending on the model you have, some also boast smart programs, that allow you to make delicious dishes from various preset recipes.

Also noteworthy, is the range of accessories that are available for the Instant Pot. For instance, you can easily switch the default lid for a glass lid for better visibility of the inner contents. Aside from that, you can also purchase additional sealing rings, stainless inserts, stackable pans, steaming baskets- the possibilities are endless!

Breakdown of the Instant Pot’s Functions

Depending on the model you have, the functions can vary slightly. All in all however, the basis is the same. A multi-cooker, it combines a number of appliances into one (as mentioned earlier, these include:

Instant Pot vs Other Cookers

Compared to standalone cookers, the Instant Pot is obviously superior (the main point being the fact that it’s capable of multiple functions). Since it’s rise in popularity however, other companies have been releasing multi-function cookers. For instance, brands such as Cosori and Cuisinart have their own version of the Instant Pot.

What is the Breville Fast Slow Cooker?

If you’ve done any research on multi-cookers, then you’ve probably come across the Breville Fast Slow Pro. Similar to the Instant Pot, it boasts numerous functions for maximum convenience and versatility. Available in similar sizes, it comes with a color-changing LCD screen that tells you whether the cooker is releasing steam, cooking, or pressurizing.

Differences between the Instant Pot and the Breville Fast Slow Cooker

First things first, the Breville Fast Slow Cooker tends to be more expensive than the Instant Pot (though the price differs depending on the model you buy). For instance, the Breville is currently selling for $220 on Amazon while various models of the Instant Pot can be purchased for under $100.

Unlike the Instant Pot (with the exception of the Luxe), the Breville does not have the preset functionality to make yogurt overnight. Considering its high price tag, it’s a little disappointing.

When it comes to functions such as pressurizing or slow cooking however, both cookers are equally capable.

Unlike the Instant Pot that boasts convenient buttons on its interface, the Breville pressure cooker relies on multiple dials and an LCD display for program selection. While some may prefer this system, we find it to be a little awkward.

While both cookers are capable of pressure cooking, the Breville has a range of international pressure settings that you can choose from (1 to 12 PSI). In comparison, the Instant Pot only comes with two settings- either low, or high pressure.

Should I Get the Instant Pot or Breville Fast Slow Cooker?

Ultimately, it comes down to preference. Will you be making yogurt? Do you prefer a button system or a dial system? How much would you like to invest in the appliance? These are all some of the questions that you should consider before making a decision.

In fact, it might be a good idea to read up on some reviews for both products- that way, you’ll have a better “feel” for what others think about the two multi-cookers.

While the Breville Fast Slow Pro and the Instant Pot are both multi-cookers, it’s obvious that they have their differences. While they’re both solid kitchen appliances, the latter offers more options when it comes to sizes and models. On the other hand, the Breville allows for you to choose from twelve different pressure cooking settings.

In the end, you’ll have to figure for yourself, which appliance better fits your needs.