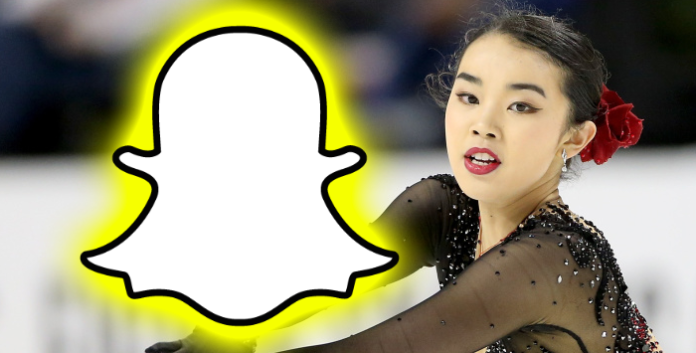 Karen Chen is a popular figure skater from the USA, best known for being last year’s national champion. Today, we will be taking a short look at her career, and her social media, including Karen Chen’s Snapchat. So let’s get started!

Karen was born in Fremont, CA, where she started training in 2005. Her first mainstream achievements happened several years later. In 2011, she won the national intermediate-level competition. At the junior level, she took the 4th spot at 2013 U.S. Championships.

She followed it up by winning a bronze and a gold at ISU Junior Grand Prix events, qualifying for the finale. However, before she could attend, Chen injured her ankle and was forced to sit it out. This led to some difficulties, and for a short period of time, she wasn’t able to get any podium placements.

During the ’14-’15 season, she came back at full force and won a gold and a silver at two separate events, in the Czech Republic and Croatia. This was the season in which she debuted at the senior level too. She managed to win the bronze at the Championships, beaten only by A. Wagner and G. Gold.

The season after, Chen managed to achieve some decent results. She debuted as a senior internationally and got the 4th spot at the ISU CS. Overall, she was at the 8th place of the ’16 US Championships and won the bronze medal in her second ever CS competition.

Most recently, she has been very successful. In 2017, she was able to win the US Championships and set a world record at the same time. You could have seen her at the Pyeongchang Winter Olympics that were held earlier this year, making her debut.

Next up, we are checking out whether Karen Chen has a Snapchat.

Unfortunately, according to Bustle, Karen Chen’s Snapchat either doesn’t exist or isn’t meant to be publicly available. However, there are some alternatives, and we’ve listed them below:

Karen Chen Instagram Username – Chen’s Insta username is the same (@karebearsk8), however, she is a lot more popular on there, with close to 80,000 followers.