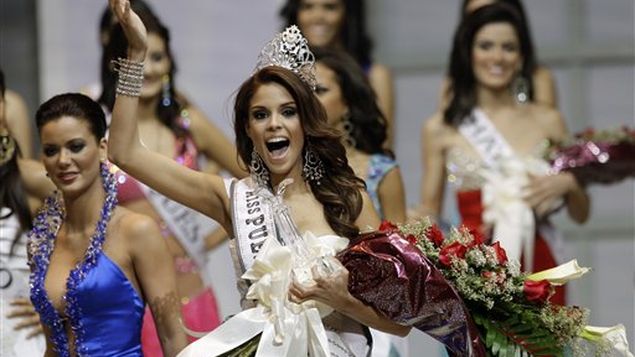 Mayra Matos, who represented Puerto Rico in the 2009 Miss Universe, has spoken about the bad side of the beauty pageants. Matos, who was the fourth finalist of the famous beauty pageant, was interviewed by the Primera Hora news site and gave her thoughts on the scandal involving Miss Venezuela.

Miss Puerto Rico Universe 2009 told the news site that she knows about the world of sexual favors that has been linked to Miss Venezuela. She says she lived it and that the cost of refusing to get involved led to six years of depression.

She went on to explain that the exchange of sexual favors exists there but it is not as organized as Miss Venezuela. She added that there are queen hunters, how she calls them, that are on the lookout to see what they get. She says what bothers her the most is that when you’re going to compete, the most vulnerable girls decide to accept the offers to get the dress that they can’t buy for the competition. She adds that the candidates are taken advantage of.

Matos says there was sexual harassment for refusing the offers that the men were making her. She was also asked why she waited so long and she responded by saying that when she ended her run, she was depressed. She says her depression lasted six years because it kept getting worse.

Matos has been working on a book, which was going to be published last year but was delayed after hurricanes hit the island. She is now planning to publish the book later this year and is still deciding on a title. In the book, she explains more on what happened and how it’s like to compete and the world that surrounds them.

Her comments come during the scandal that surrounds Miss Venezuela. The organization behind the country’s beauty pageant has decided to suspend everything while it carries out an internal investigation. The decision comes after the claims of prostitution and corruption.

Cisneros Group, which owns one of the most popular television channels in the country, has released a statement saying that the organization will create a new beauty committee and will do a reorganization. Venezuela has won 22 beauty pageant titles and is the only country to have won all four major beauty pageants multiple times. The South American nation won consecutive Miss Universe titles in 2008 and 2009.