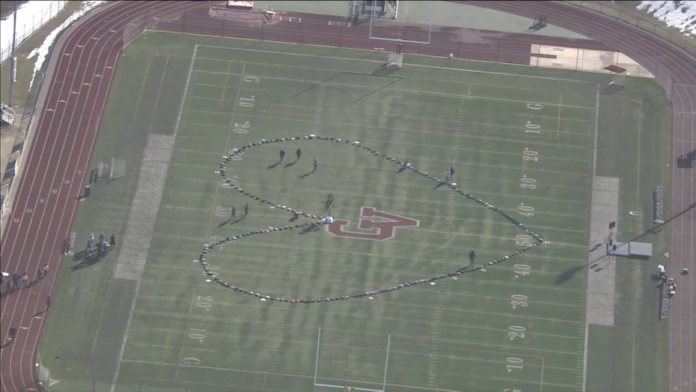 A Pennsylvania high school has honored the Florida victims in a unique way. During the national walkouts, students went to the football stadium and placed their backpacks on the field. The backpacks formed the shape of a heart in the middle of the field.

The giant heart was made at Garnet Valley High School to honor the victims of the Marjory Stoneman Douglas High School shooting. Earlier today, thousands of schools across the United States and a few around the world participated in walkouts.

The walkouts to honor the victims came a month after the shooting, which left 17 people dead. The shooter, Nikolas Cruz, was arrested shortly after and yesterday, reports revealed that a Florida prosecutor said that he would seek the death penalty. The decision came just a few hours before the walkouts took place.

The national walkouts were also done to protest against gun violence and to call for new gun control measures. Most of the walkouts lasted 17 minutes, with each minute representing a person. Many school districts have approved of the protests but some schools have reportedly threatened to punish those that participate in protests and walkouts. In Plainfield, Illinois, the walkouts came with a guideline. Those that were planning to participate were told that they had to attend an after school event with state legislators. Plainfield School District Superintendent Lane Abrell said to ABC News that the students who participate in the walkout but do not attend the event would receive a one hour detention.

Abrell said that in his opinion, the walkout doesn’t really solve the problem. The Plainfield School District Superintendent added that the talk with local legislators is a way to learn how the issues can be solved. In California, students at Mt. Diablo High School broke through a gate to leave the campus. The gates were locked before the walkout began but students broke through a back gate.

The walkouts began at 10 a.m. but some lasted longer than the 17 minutes planned. Women’s March Youth member Tabitha St. Bernard Jacobs told ABC News before the event began that the walkout is about pressuring the Congress to act against gun violence.

The walkouts were different across many schools, some held rallies while others, like the high school in Pennsylvania, made a tribute. Students from some schools walked to the Philadelphia City Hall. In New York, Governor Andrew Cuomo joined the walkout.