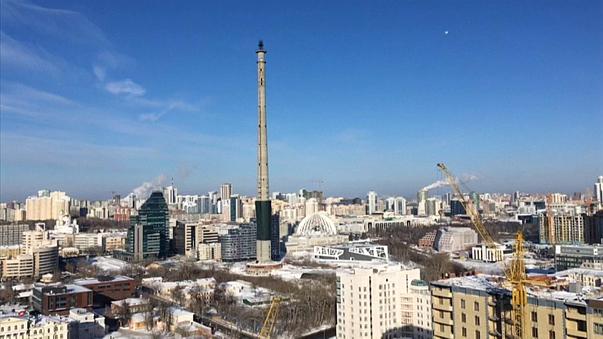 Russia has demolished an abandoned TV tower to make the city look better. The demolition comes just months before the country hosts the World Cup. The controlled demolition took place on March 24 but footage recently surfaced.

The abandoned TV tower was located in the city of Yekaterinburg, where some of the World Cup matches will be played. A number of explosives were placed by authorities to demolish the structure. The TV tower was gone in seconds, with only a small part of the structure remaining.

Construction for the TV tower began back in 1983 but it was suspended eight years later after the collapse of the Soviet Union. The 720 ft structure stood out in the city, despite never being completed. The structure was planned to be much taller but that never happened with the suspension of construction.

Authorities decided a few months ago that the structure was disfiguring the city landscape because it was abandoned and never completed. Reports say the tower once held the record for the world’s tallest abandoned structure.

Deutsche Welle reports that an ice rink will be built in the area. The demolition is part of the country’s program to improve and clean the cities before the sporting event. Yekaterinburg will host four World Cup matches.

Governor Yevgeny Kuivashev said that no one seriously believes that it needs such a symbol. The tower is now gone but some residents aren’t very happy about the city’s decision to demolish it.

Some Are Not Happy With The Decision

Some residents say the abandoned TV tower was part of the city. The decision to demolish the structure was made last year and several people immediately began opposing to it. One of them was Ivan Volkov, who led a committee opposing to the decision. He told Reuters that now it is the symbol of humiliation at the hands of the authorities because the decision was made behind the scenes.

Russia will use 12 stadiums during the World Cup, which will likely attract many visitors to the country. In November 2017, reports revealed that the country had spent more than $10 billion in stadiums and infrastructure for the World Cup. Back in August, Russia completed the renovation of the stadium that will host the opening and final match of the World Cup. Russia and Qatar were chosen as the hosts of the 2018 and 2022 World Cups in 2010.