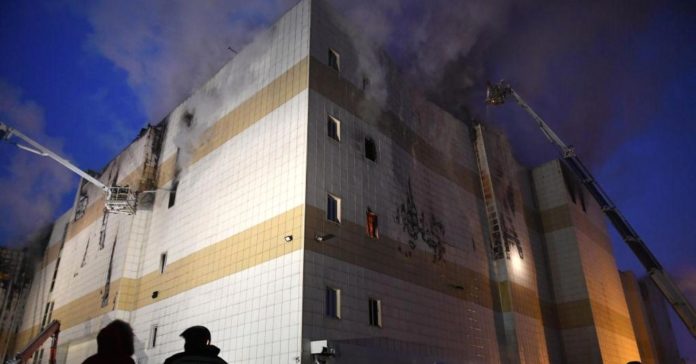 Russian investigators say the exits were blocked and the alarms were off when the fire at the shopping mall broke out. The fire, which happened at a mall in Siberia, killed 64 people.

A day after the fire, the country’s Investigative Committee has revealed that there were serious violations, including the blocked exits. The Winter Cherry mall, which opened in 2013, was partially destroyed by the fire, which burned for 12 hours.

Authorities are still investigating the cause of the fire, which is said to have started on an upper floor. A video inside the mall shows several people running away from the area where the fire began. Rossiya 24 TV reported that an electrical fault was likely what started the fire but the deputy governor has been quoted as saying that the first suspicion is that a child had a cigarette lighter, which burned the foam rubber in the trampoline room.

The fire was extinguished on Monday morning but smoke continues to come out from the mall. Local media reports that most of the roof has collapsed while emergency teams have revealed that there is a risk of collapse on part of the structure.

The mall was packed at the time since children were just starting a school break. The fire burned parts of the fourth floor, where children’s playing rooms and movie theater were located.

Investigators have found that exits were shut and that alarms were off. The Investigative Committee added that a technician at the mall switched off the alarm system after learning about the fire. Authorities have detained several people, including the manager of the business where the fire broke out. Two witnesses have told the BBC Russian Service that they saw a fire in the trampoline room but that they did not hear any fire alarms.

Emergency teams have recovered 58 bodies but only 17 have been identified. 11 people are being treated in nearby hospitals. Ten people are listed as missing. An Instagram post from the city shows a picture of people lining up to donate blood.

The Winter Cherry mall, which used to be a factory, opened in the city of Kemerovo five years ago. The mall included a zoo, children playing rooms, bowling alley and movie theater. The fire burned through the fourth floor, destroying most of those areas, including the zoo.