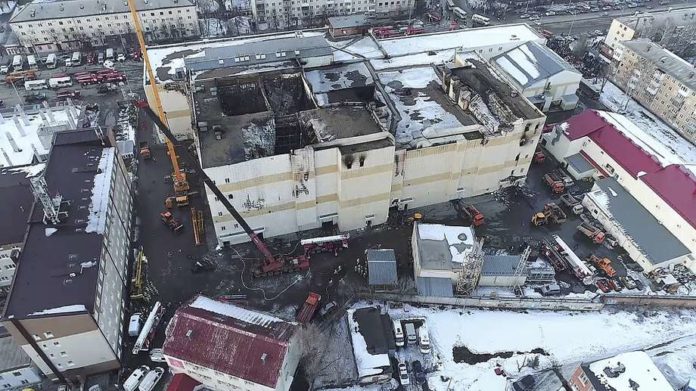 Hundreds of people have protested in the city of Kemerovo over the mall fire that left 64 people dead and many others missing. The fire, which happened on Sunday, killed 41 children.

The protest took place outside of the local government headquarters. Some of the protesters say that officials must be fired over the incident. Yesterday, investigators found that the exits of the mall had been shut and that a technician had decided to switch off the alarms after finding out about the fire.

Authorities have revealed that there are 38 people missing but relatives of the victims say that number is not accurate. They say that another 67 people are missing. The fire was extinguished on Monday morning and authorities continue their investigation.

Authorities believe the fire started on the fourth floor but the cause is not yet known. The Winter Cherry mall was full of people at the time, including children since they had just started a school break.

There are different stories on what may have started the fire. One official was quoted as saying that the fire probably started in the trampoline room, which was located on the fourth floor. That official said that the initial suspicion is that a child had a cigarette lighter, which burned the foam rubber in the room.

Investigators say the alarm was off at the time of the fire. Some of the witnesses have said that they did not hear a fire alarm and that they learned that there was a fire from other people that were leaving.

The Investigative Committee found that many of the exit doors were shut on the fourth floor. A movie theater and children playing rooms were located on that floor. Investigators believe this was done to prevent people from getting in the movie theater without tickets.

Among the protesters was a man who lost three children and his wife. Reports say they were in the movie theater when the fire started and that they couldn’t escape because the doors were blocked.

Local media reports that the protest lasted more than seven hours and that many of the people were asking for officials to resign. President Vladimir Putin arrived to the city earlier today and met some of the survivors at the hospital.