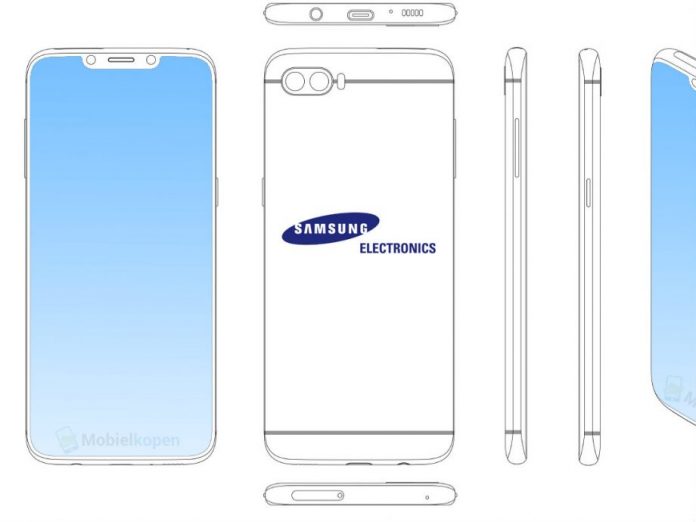 It’s been six months since Apple released the iPhone X but a lot of things have changed since. The notch on Apple’s premium phone, despite not being super popular among some smartphone users, can now be found in many devices.

Huawei, Asus and a few other companies have added a notch to their best phones. It is also looking like many other companies will do the same in the next few months, including Samsung. Apple’s biggest rival recently filed a patent with a few different smartphone designs. All of the designs have a notch on the top of the display.

The patent is interesting news as many of us thought Samsung would never consider going that route. Back in November, Samsung actually made fun of the notch in an advert. In the pictures, we see a display that covers most of the front. On top, we see the rectangular cutout that houses the camera and sensor. The rest of the device looks like a regular smartphone.

The patent, first spotted by Mobielkopen.net, does not mean that Samsung will actually release a phone with a notch but it is still interesting since no one knew that the company was considering it. Samsung would join the many companies that have decided to add a notch if the phone is released.

In recent months, we’ve seen other popular smartphone makers such as Huawei and Asus release phones with a notch. The Huawei P20 actually has a feature in which you can turn off the notch if you’re not a fan of it. LG is also said to be working on the G7, which is rumored to have a notch. LG has not confirmed any of this but several leaks have shown images with a notch. A picture of the phone, which reportedly made a secret appearance at MWC 2018, also shows a notch similar to the one on the iPhone X. The phone has actually been compared a lot to Apple’s premium phone since leaked images have shown similarities on the front.

The notch was one of the biggest topics during the iPhone X release and while many still don’t like it, it is now becoming more and more common among smartphone makers. What do you think about the notch found on many smartphones today? Would you like to see a Samsung phone with a notch? Let us know in the comments.