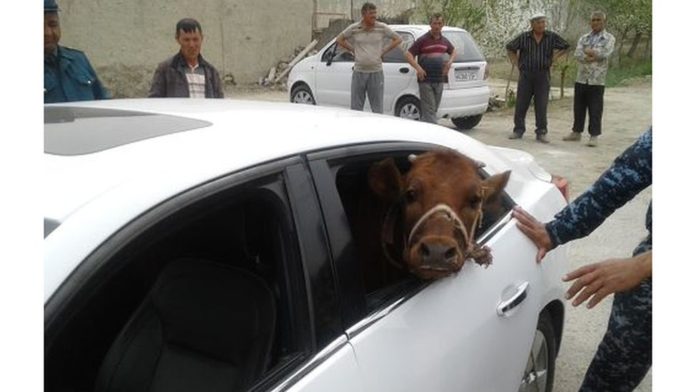 Authorities in Uzbekistan have arrested two men after they were caught carrying stolen livestock in the back of an expensive car. The men were caught as they were driving with a calf on the back seat.

The arrest happened in the city of Bukhara, where authorities had been investigating after reports of thefts. In recent weeks, residents had reported that cows and other animals had gone missing.

Authorities now know who was behind the thefts of the animals, which were being transported in an expensive car. UzNews reports that authorities tracked down the suspects and made the arrests.

Police say the men were transporting the animals in the car to avoid suspicion. They added that the men had transported bulls, sheep and other livestock in there. The car that was used in the thefts was a Chevrolet Malibu, which is common in many countries but not in Uzbekistan.

The car is sold there but a lot of the population does not have one as it is very expensive. The Malibu is considered a luxury car in the country, starting at about $30,000 there. The price is much higher than in countries such as the US, where it starts at $21,700. The car isn’t designed to carry animals but the thieves had used it a few times before. The idea worked for a while as authorities confirmed that they had stolen other animals with the same car. Police did not say where the animals were being taken or what the suspects were doing with them.

Pictures after the discovery show many watching as police get ready to take out the calf from the back seat. The calf appeared to be a little uncomfortable as it is much larger than the back seat. Another picture shows the calf walking around.

The discovery has gone viral in the country, with many joking about it on social media. Police have not given any other details on the thefts but residents are probably very happy with their investigation and arrests as they will no longer have to worry about losing their animals.

Earlier this year, authorities in Spain arrested five people for using two vehicles to avoid suspicion. The suspects were not caught with a cow or bull but with tons of oranges. The oranges were being carried in a car and a van. Authorities were told that the oranges had been picked from the ground but they later confirmed that they had been stolen from a warehouse.